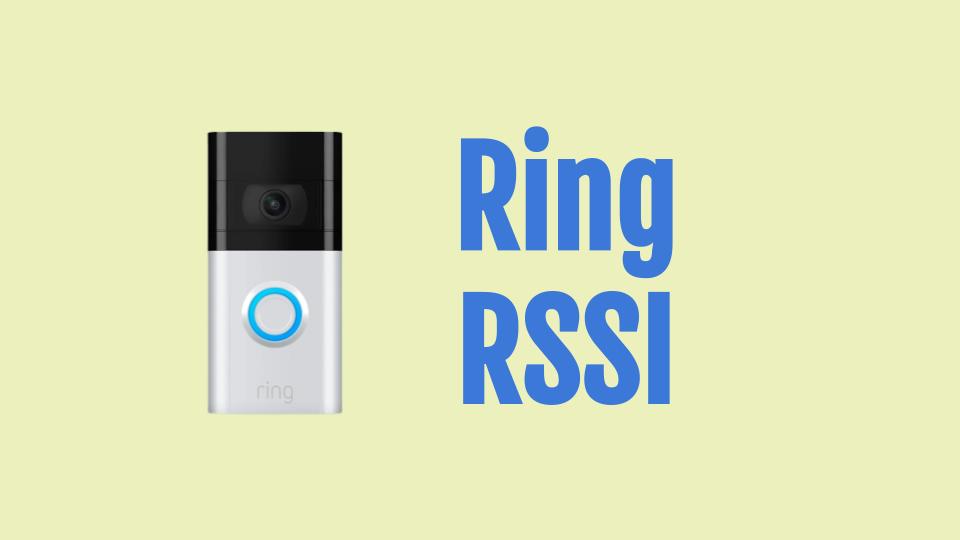 It indicates the strength of the Wi-Fi signal from your router to your Ring doorbell. The lower the RSSI value, the weaker the signal. If the signal is too low, it means Ring won’t be able to connect to your home network.

Now let’s get into some details. The table below shows how the quality of Ring relates to the RSSI value. The scale is split into three main regions.

What is a good RSSI level for Ring?

A signal that is -50 dBm and higher (as reported by the Ring app) is a good RSSI value.

Why are RSSI values negative?

A Wi-Fi access point transmits signals that are at a level of +20 dBm. The further you move away from it, the lower the value – so the value gets more negative with increasing distance away from the router.

What is the range of a Ring doorbell?

A Ring doorbell has a range of around 160 feet or less.

How to calculate RSSI?

Use this tool to calculate RSSI. It will give you an estimate of what you can expect based on distance from the Wi-Fi router and walls or floors that are in between.

Is RSSI measured in dB or dBm?

RSSI is measured in dBm. dBm is an absolute number – just like Watt and in fact you can calculate one from the other.

dB on the other hand, is a relative number and has no units. dB can be used to indicate the difference between two numbers. So if your RSSI yesterday was -70 dBm and today it’s -50 dBm, you could say that it improved by the difference or by 20 dB.

Is higher or lower RSSI better?

In general, a higher RSSI is always better than a lower RSSI. In the context of Ring, the closer the value is to 0 the better. The more negative the value, the worse. However as shown in the chart above, there are three main RSSI performance score regions. You won’t notice significant differences in quality if you’re at -40 relative to -30 (even though -40 is lower).

Why does Ring RSSI keep changing?

RSSI changes continuously due to many factors including but not limited to:

An indoor radio environment is never static and as a result the RSSI will always fluctuate.

Not necessarily. Even though you have a high RSSI value there are two other things that can impact performance of Ring:

RSSI level of 53 means the signal level is adequate or acceptable for Ring to work. For a good signal level, the RSSI value would have to be lower than 50. An RSSI level of 47 is good while a level of 57, 58 and lower are trending toward poor.

How to improve Ring RSSI?

Reduce the distance between Ring and Wi-Fi router

While this can be challenging at times, move the router closer to the Ring. Also where possible reduce the number of obstacles between the router and the Ring.

The Chime Pro extender can be used to extend the range of your Wi-Fi network by up to 2000 feet.

This means you don’t have to move your Wi-Fi router closer to the door. There are a number of other Wi-Fi extender alternatives to the Chime Pro as well.

Get a Wi-Fi analyzer app for your phone to show what 2.4 GHz Wi-Fi channels are being used around you. Find a channel that’s used the least, and set your 2.4 GHz Wi-Fi to that. Don’t use the Auto setting on your router.

The Ring Doorbell 3 and 4 support both 2.4 GHz and 5 GHz Wi-Fi. In general 5 GHz Wi-Fi has shorter range but faster data rates and lower levels of RF interference. This will give better RSSI readings albeit over a smaller distance relative to 2.4 GHz.

In this post we discussed RSSI – what it means and how important a good signal level of at least -50 is to ensure that your Ring doorbell functions properly. We provided some tips and tricks to improve the performance of the device.