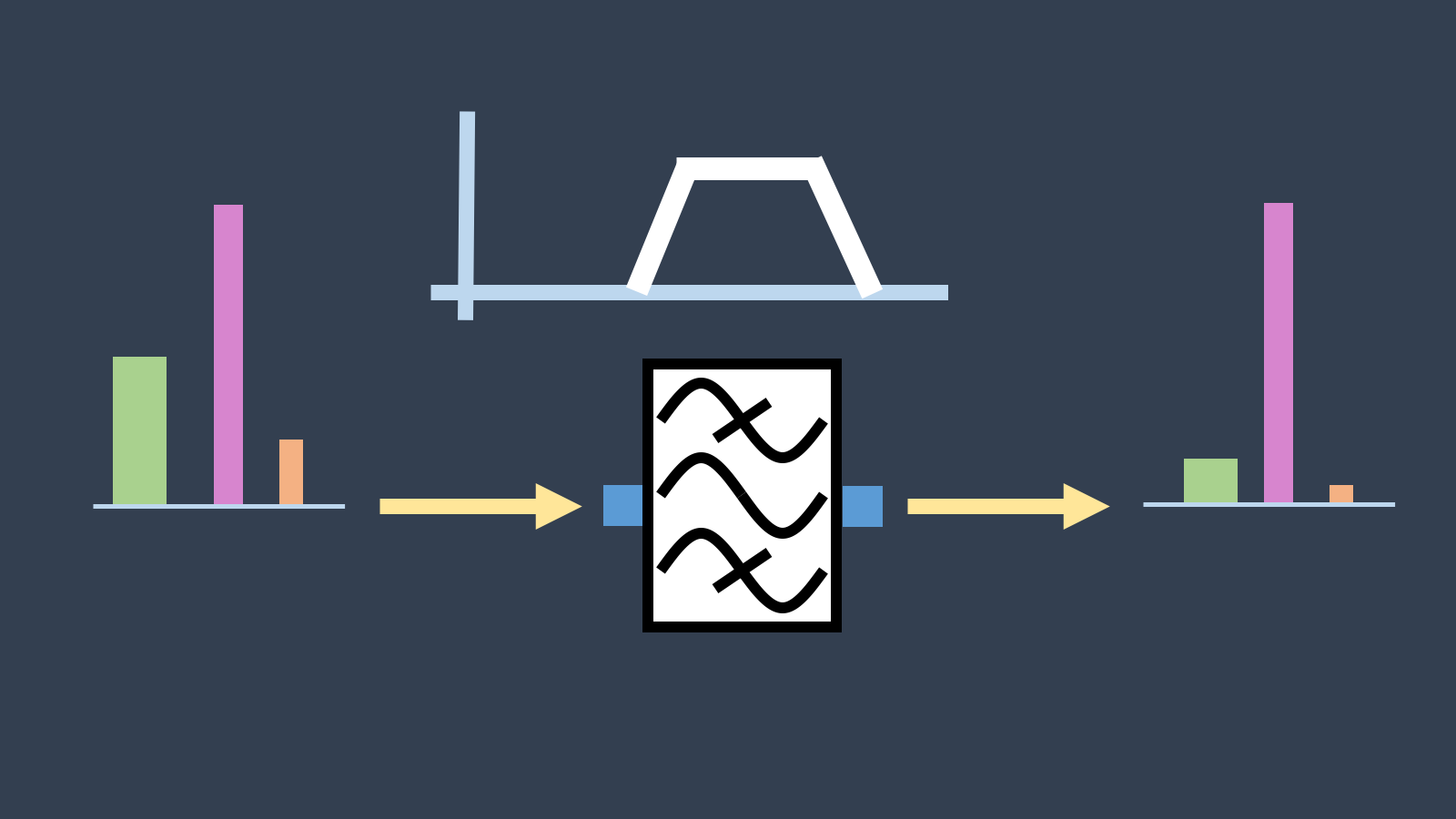 An RF filter is a hardware device that is used to limit signals in certain frequency bands while allowing signals of interest at other frequencies to pass through. Filters are used in both SDR transmitters and receivers for different reasons.

Filter use in a receiver

In a receiver, a filter is used to limit signals that would otherwise degrade the performance of the receiver in terms of its ability to process the signal. So for instance a band pass filter can be used to limit the effect of a strong out-of-band interfering signal that might otherwise saturate or damage the receiver.

Filter use in a Transmitter

When a transmitter generates a signal to be sent out over the antenna, it can also generate several spurious (spurs) signals in the process. Transmitting these spurs can be damaging to other radio systems. A transmit band pass filter is used to limit such spurs.

There are mainly four different types of filters as shown in the picture below.

Each of the filters has a pass band and stop band which are the frequency ranges of signals that are allowed through or attenuated by the filter, respectively.

There are three key attributes of a filter. The table below lists these specifications for Band pass, Low pass and High pass filters.

In the case of a notch filter, the center frequency and bandwidth refers to the range of frequencies that the filter will reject.

The Insertion Loss and Rejection are specified in decibels (dB). In general, the pass band insertion loss should be as small as possible and in real-world filters typically this number varies between 1 dB and 5 dB. The out-of-band rejection should be as high as possible. Theoretically, the further away in frequency a signal is from the pass band, the higher the rejection. However this is not generally true in practice. Below is a plot of a Mini-Circuits filter’s rejection.

There are two things that really stand out here:

Some SDRs have built-in filters called pre-selectors or pre-select filters. These filters are used to eliminate signals that are outside the range of frequencies at which the SDR is being operated. An SDR that operates over a wide frequency range typically has a bank of pre-select filters that it switches across depending on the frequency of operation. Let’s say for instance an SDR operates from 25 MHz to 1700 MHz. In this case a pre-select filter bank could potentially be comprised of three filters as shown in the picture below. The first filter has a pass band between 25-500 MHz, the second between 500-1200 MHz and the third between 1200-1700 MHz.

Now when the SDR is tuned to operate anywhere between 25-500 MHz, the first filter in the bank of three is selected. The second or third filter in the bank is selected depending on whether the SDR is operating in the range of 500-1200 MHz or 1200-1700 MHz, respectively. The filters are specified and designed to both minimize interference to the receiver and the transmission of spurious signals.

Most SDRs on the market at the sub-$500 price point don’t have built-in pre-select filters as can be seen in the table below.

Most if not all of the above lower-cost SDRs have limited receiver dynamic range and in the absence of filters they are easily saturated by strong signals. In another post we wrote in more detail about the importance of FM notch filters to prevent saturation. On the transmit side there are almost always spurious signals generated as a result of clocks or other signal processing in the SDR. It becomes very important to filter these spurs and reduce their levels prior to transmission as they can interfere with other wireless systems.

Although ideal, it is very difficult to add a pre-select filter bank to an SDR that doesn’t already have one built-in. On the other hand, when an SDR is used in a specific band and for a particular application it is relatively easy and always advisable to use an external RF filter for best performance. The type of filter used depends on the application.

For instance if an SDR is being used to read water meters that communicate at 869 MHz, then it’s a good idea to use an 869 MHz band pass filter to limit out-of-band signals. If an SDR is being used for many different applications such as ADS-B, AIS, etc. and is being operated near a strong FM transmitter, an FM notch filter would be very beneficial.

In this post we discussed the different types of filters and why they are required for SDRs. If an SDR doesn’t have a built-in preselect filter bank or pre-selector it is recommended that an appropriate external filter be connected and used with the SDR.