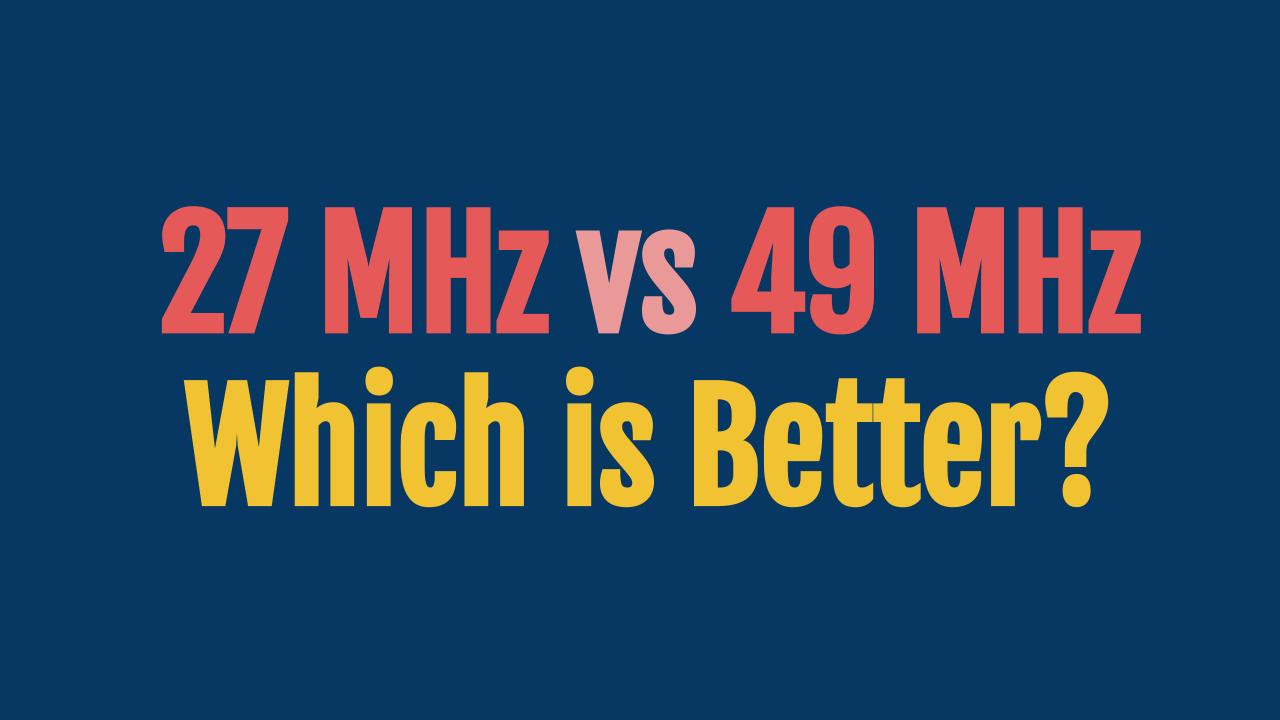 In this article we look at the frequency of R/C cars and explain which is better. As a quick summary of the article – we found through our research that in most situations, 27 MHz is better than 49 MHz.

Let’s get into the details.

27 MHz is the frequency at which the remote control communicates with the toy car. It is in the High Frequency (HF) communication band.

The frequency of the remote control communication does not have any impact on the speed of the car. As a result both 27 MHz and 49 MHz RC cars operate at the same speed.

Here is a list of Radio Control car frequencies:

With a larger number of channels, there are more opportunities at 27 MHz to avoid RF interference from other RC cars. This makes 27 MHz better than the 49 MHz band.

The only exception to this is when a CB radio is nearby. It can interfere with the 27 MHz band. When this happens either the range of the RC control is reduced or it works intermittently.

What is the control range of an RC car?

Can 2 remote control cars use the same frequency?

Some RC cars are set to the same frequency value. This is an easier and less expensive job for the manufacturer. However if you (the user) try to operate these cars in the same area, they will interfere with each other and not work. In general we do not recommend using the same frequency for 2 RC cars.

RC controllers are not designed with any intelligence in them. They can’t tell when there’s another one nearby and to switch to a different frequency.

While CB radio operates in the 27 MHz band, the center frequency of operation is different from that of RC cars. It therefore does not interfere directly with R/C car operation. You can see this in the frequency table below.

However if the receiver is not well designed then there is a chance that adjacent channels from CB radio (which is a much stronger signal) can interfere with RC cars.

How to change the frequency on an RC car?

Cheaper RC cars operate on the same frequency and have no options to change. In this case if two people in one room are trying to control two different cars from the same manufacturer in one room they will interfere with each other and not be able to communicate.

A jammer is a device that will prevent your RC controller from talking or communicating with the car. In general it is very easy to buy a jammer and all you have to do it turn it on. The jammer will send out a strong signal that will overpower the signal from the RC controller. This will prevent the car from being able to understand the commands sent by the controller.

What is the future of RC Cars?

These days, more and more RC cars are built with 2.4 GHz radio technology for communication. This frequency range and associated modules brings more functionality and features to the world of RC cars.

In this post we have discussed the pros and cons of the two frequencies 27 MHz and 49 MHz for RC cars. Based on our research and analysis, 27 MHz is the better frequency.