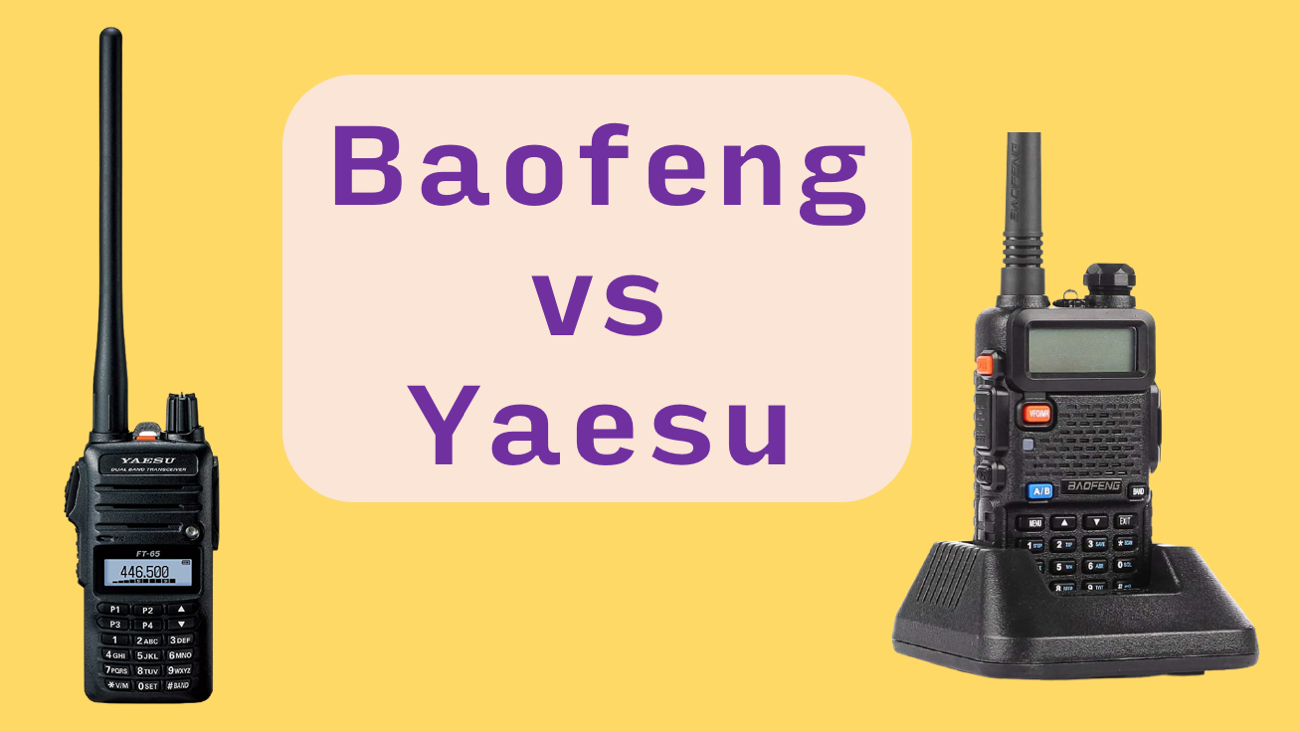 A walkie-talkie, formally known as a handheld radio transceiver, is a portable two-way radio that can be used for a wide variety of applications including military, amateur radio and personal use.

When it comes to making a purchasing decision, prospective buyers often find themselves asking: “Which one should I buy: Baofeng or Yaesu?”. Two very popular and economical handheld radios that are used throughout the world.

In this article we will review and compare two very popular handheld radios: the Baofeng UV-5R and the Yaesu FT-65R.

Baofeng radios are made by Fujian Baofeng Electronics Co. Ltd. The company specializes in the research, manufacture and sale of communication products. Founded 20 years ago in 2001, the company presently has over 1,000 employees two manufacturing plants.

Yaesu was founded by a Japanese radio amateur Sako Hasegawa in 1959. Yaesu has a long operational history and at one point in time were even owned by Motorola. Their product portfolio includes audio systems, transceivers, receivers and antenna rotators.

The table below compares criteria related to the build quality of both radios.

The Yaesu radio is also MIL-810-C, D and E certified. The MIL-810 standard is a series of tests that address a broad range of environmental conditions that include sand and dust exposure, shock and transport shock, humidity, fungus and salt fog for rust testing, exposure to high and low temperature plus temperature shock and vibration. The MIL-810 series of tests are approved by all agencies of the US DoD but can be used for commercial equipment as well. What all this means is that the Yaesu radio has a build quality that makes it compliant with military-standard tests. And that is really something! No such certifications are available for the Baofeng unit.

A visual inspection of both radios confirms that the Yaesu has better build quality: all the buttons are rubberized, and nylon screening is used on the mic and speaker to keep the water and dust out. The antenna connection is also sealed. The Baofeng unit on the other hand has plastic buttons on the sides, and rubberized buttons only on the front. It obviously does not provide the same level of sealing against external contaminants as the Yaesu radio.

Table 2 compares the radio specifications for the Yaesu and Baofeng radios.

Users have reported that the Baofeng radio cannot be used for normal conversation when a user is standing next to a Wi-Fi router. However, no such problem is faced when using the Yaesu radio. As well, users have reported poor intermodulation performance with the Baofeng and it seems to overload a lot easier than the Yaesu. This points to a poor and cheaper RF design with the Baofeng. This also demonstrates that the receiver on the Yaesu unit has much tighter filters that have better out-of-band rejection. Radio performance costs money and that’s clearly what you get with a Yaesu.

Both of these units can be used for communication over VHF and UHF bands. Additionally, both radios also support FM radio reception.

A speaker mic can be ordered separately for both the Baofeng and the Yaesu radios.

A 12 Volts DC car power adapter is available for the Baofeng radio, but not for the Yaesu.

Optional PC programming cables are avaible for both radios.

Both radios come with stock antennas. The stock antennas on both types of radio has a SMA-female interface and an impedance of 50 Ohms. For improved performance, the stock antennae can be removed and replaced with higher quality antenna, such as the Nagoya NA-701, and others that are available on the market.

The Yasesu radio retails for around four times the price of the Baofeng radio. While that’s a big difference, we feel that this price difference is wholly justified, as the Yaesu has significantly better build quality and radio performance.

Most users have reported their satisfaction with the build quality and performance of the Yaesu radio. Users who previously owned a Baofeng considered the Yaesu a “huge upgrade”.  Some users have commented that the user manual that comes in the box is a condensed version, and the complete manual needs to be downloaded from website.

The Baofeng received very favorable reviews by most users who felt that it offers the best value for money and is ideal for beginners. Users commented that the radio is easy to use and has good performance. There’s little doubt that this is a very popular radio!

Some advanced level users – who can compare to other radios – acknowledge that the radio performance is not as good as more expensive radios, but that is something that is understandable given the economical price at which this radio retails. Some users were able to improve the radio performance by replacing the stock antenna with a better quality antenna.

The Yaesu radios come with a 3 year warranty. The warranty around the Baofeng radios is unspecified and unclear. In fact customers have experienced their concern around this aspect. The radio seems to almost have a disposable philosophy around it with both the low price point and the build quality.

Important Notes on Using the Baofeng and Yaesu Radios

One thing that should be mentioned is that both these radios receive only analog i.e. do not receive digital service.

Make sure that you are aware of the frequency bands in your location where you are allowed to transmit, so that you don’t get in trouble with the law by transmitting on frequencies for which you do not have a license!

So which one should you buy?