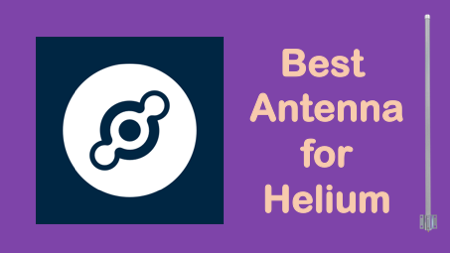 By now you’ve probably heard of the Helium network that is experiencing exponential growth globally.

The Helium network is intended to provide connectivity for the billions of IoT devices that are entering our world. The goal is to connect everything – from dog tags to bicycles and more. No more lost cats and dogs and you will likely know where your bicycle is at all times.

It is estimated that there will be over 120,000 active hotspots by the end of 2021. So once you join the network, how do you maximize your helium token rewards?

One way to do this is to upgrade your antenna to one with higher gain (dBi).

In this review we will look at two different antennas that we have picked. These are the Mikrotik 6.5 dBi antenna and Embedded Works 8 dBi antenna. In our buyer’s guide we also make recommendations on how to pick an antenna depending on the location where you plan on installing it.

Mikrotik is a known brand in the EU. They have been in business since 1996 and they make a number of electronic products including routers and antennas. This is an omnidirectional dipole antenna with 6.5 dBi gain. The antenna is more directional than the stock antenna that ships with your helium hotspot.

The Mikrotik antenna covers the frequency range 824-960 MHz so it can be used in the EU, USA, Canada, Australia and any other country that uses these frequencies. It has SMA Female Connectors so you will need to buy the appropriate RP-SMA to SMA adapters so it can be interfaced with the Helium hotspot.

An 8 dBi is more directional and focused than either the stock antenna or the Mikrotik antenna. This means that it will also have larger range in the horizontal direction at the expense of in the vertical direction. I use an 8 dBi antenna with our hotspot that’s in the attic of our house and it works well for our RF scenario. For instance, I can see hotspots as far away as 18 miles (29 km) on land and twice that distance across a body of water. The Embedded Works 8 dBi antenna is a good choice for many scenarios.

How to pick an Antenna for Helium

Helium hotspots ship with a stock antenna. The Nebra hotspot for instance ships with a 2 dBi antenna. It’s worthwhile to try this antenna first and establish a baseline for how it works for a few weeks before upgrading to a higher gain antenna. This is the approach I took and it’s worked well.

The global Helium network operates in a few different frequency bands. Here is a partial list:

In fact, most people will only be able to place a hotspot in their homes or apartments. So let’s take a look at the best antennas for each of these locations.

The Best Helium Antenna for a House

If you live in a house in a suburban community, surrounded by other homes, the best antenna for this situation is the Embedded Works 8 dBi antenna. The best placement is in your attic or better yet mount it on the roof. It won’t be very effective in the basement or lower floors of your house. However, if the basement is the only location you can place your miner, then the stock 2 dBi antenna that ships with your hotspot might actually work best.

The Best Helium Antenna for an Apartment Building

If you live in an apartment building, we recommend the Mikrotik 6.5 dBi Antenna. This antenna presents a good balance.

What is Antenna Gain?

Antennas, especially those under consideration in this post, are passive devices. They don’t amplify signals. Contrast this with GPS antennas that are typically active with built-in amplifiers that help with signal reception.

Antenna gain is a measure of how well they transmit and receive signals at the frequency under consideration. The gain of an antenna is specified in ‘dBi’. Quite simply this is the gain relative to a simple isotropic antenna.

Typically the higher the gain of an antenna the more directional or focused it becomes. This directionality however comes at a cost – it doesn’t radiate or receive energy equally from all directions. A directional antenna is used if you want to focus your reception or transmission activity in a particular direction at the expense of uniformly in every direction.

Should I upgrade my Helium Antenna?

Where should I place my Helium Hotspot for maximum HNT earnings?

The best place to mount an antenna is on the highest point possible. If you live in a house that means on the rooftop or at least in your attic. If you’re have an antenna tower in your backyard, that would be ideal as well.

In these situations, you are better off starting out with the Mikrotik 6.5 dBi Antenna and experimenting with and upgrading to the Embedded Works 8 dBi antenna if it makes sense.

What is the cheapest Helium antenna?

The cheapest Helium antenna is the stock antenna that ships with your hotspot. It is a quarter wave dipole that looks like this. A good antenna will pay for itself many times over – sometimes even in the course of a single day. This is definitely not an area where you want to economize. In fact we recommend buying a number of different antennas and experimenting with placement on your property, mounting height and other factors.

What is the range of a Helium Hotspot?

The range you are able to achieve largely depends on where you place your antenna and hotspot. It can be as high as 40 miles or even more. The larger ranges are achievable when there are two well placed hotspots across a lake, for instance.

Are Helium Hotspots safe to use?

Yes Helium hotspots are safe to use. They meet FCC/CE regulations and are certified.

How do we mine Helium?

Helium is mined using a hotspot connected to the internet. In order to be able to mine any significant amount of Helium you need to be able to witness other Helium hotspots.

Can I mine Helium on my PC?

No, you cannot mine Helium on your PC. Helium needs dedicated hardware – specifically a Helium Hotspot that needs to connect with other hotspots to mine Helium.

Hotspot Miners come with a DC power supply. However you may want to mount the miner on a tower. The benefit to mounting on a tower is that it will reduce the length of cable between the antenna and the miner. This in turn reduces noise to result in better sensitivity, more witnesses and therefore more HNT!

However mounting on a tower presents a challenge when it comes to powering the miner. One product that allows you to simplify powering of the hotspot is a Power over Ethernet adapter.

It is important to keep the length of cable from your antenna to your hotspot as short as possible. Why is this? The simple reason is that the longer the cable, the greater the attenuation. An increase in attenuation by 6 dB will reduce your range by half. And in the world of Helium that means your hotspot will witness fewer beacons. If you’re interested in reading more about this check out our post on Noise Figure. In the picture below you can see cable attenuation as a function of both length and frequency.

If you are going to mount your antenna outdoors where it is exposed to the elements, it is important to add a surge protector inline.

This little device will ensure that your sensitive helium miner has lightning protection. It is also important to ground your antenna.

In this post we’ve looked at a couple of different antenna options for your helium hotspot. We recommend trying the stock antenna for a couple of weeks to establish a performance baseline before upgrading and experimenting with the high gain antennas.

When you’re ready to upgrade we recommend the following antennas depending on where you want to place your Helium Hotspot.

OneSDR is reader-supported. As an Amazon Associate I earn from qualifying purchases. Thank you for your support.