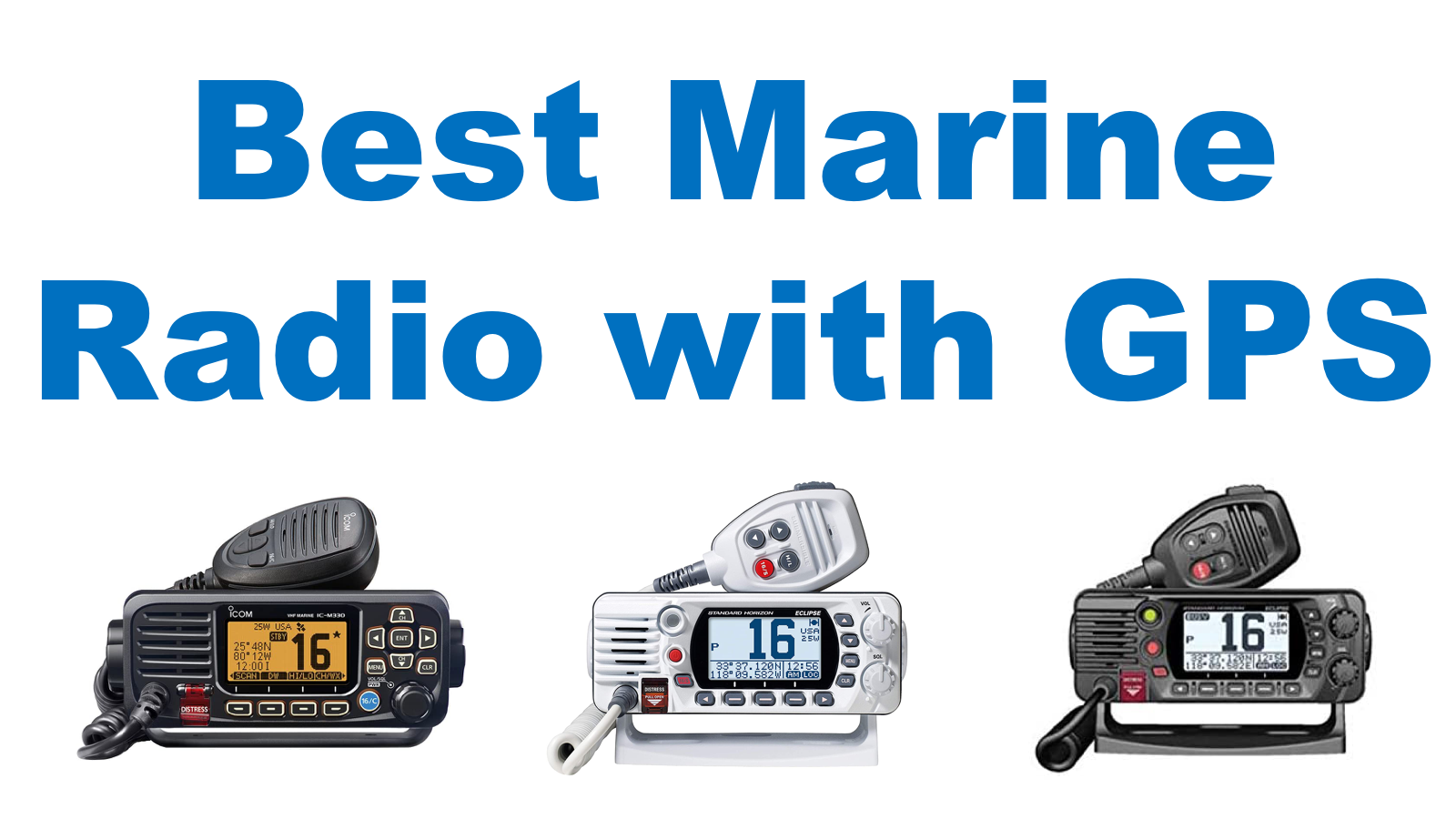 Marine VHF radios – your rescue network at sea. The Very High Frequency (VHF) Marine Radio helps communication between your boat and other boats such as the United States Coast Guard.

And in this article, we’re going to show you our top 5 Marine VHF radios. The best thing? We’ve chosen five that have a GPS. Our top pick is the Uniden MHS335BT with an amazing feature set. Coming in at a close second is the Standard Horizon GX1400GB. We also present our research methodology by way of a buyer’s guide. So without further ado, let’s get into the details.

The Uniden MHS335BT is a handheld marine radio. It’s portable. It has a full 6 watts of power along with a class D industry standard DSC. DSC is short for Digital Selective Calling. This is a feature that allows the radio to transfer information digitally, not just by voice, and to instantly send a digital distress alert to the Coast Guard. The Uniden has an integrated GPS. It even has a flashlight! Other than that, it gives local weather alerts. It has a Bluetooth feature wherein you can use a smartphone app to set up the radio and text message other VHF text message capable radios. It has a built-in compass screen and automatically activates distress feature when in water. It even has some other components like the charging cable, charging cradle, wrist strap, belt clip, and an antenna. Great, right?

So, we chose the MHS335BT and deemed it our top pick because of all its great features. It includes loads of components and has great reviews. The MHS335BT has a 4.4 out of 5-star rating on Amazon. A reviewer says that it’s “money well spent” because the radio is well built and has sound quality that isn’t too bad as well as lots of volume control. The batteries last long as well. Overall, it’s a great handheld marine radio.

Introducing our runner up! The Standard Horizon GX1400GB VHF Marine Radio! This radio comes with a built-in 66 Channel WAAS GPS receiver as well as radio controls on the microphone. The DSC feature, when activated, transmits a MAYDAY including vessel identification, latitude, longitude and time. It comes with a separate Channel 7 meaning you can receive calls and listen to communications at the same time! This is a fixed marine radio.

With its great features and affordable price, the GX1400GB claims the runner up spot. It has a 4.7 out of 5-star rating and is ranked #43 in Marine Two-Way Radios. It has been described as “easy to use” and a “great radio”. A review says that it has clear communication. Another says that the radio is compact, the GPS works flawlessly and the radio itself is very power-efficient.

This is another Standard Horizon VHF Radio but this time, it’s handheld. The HX870 has an internal GPS and is supplied with an 1800 mAh Li-Ion Battery. It charges for 3 hours and is a Class D DSC. It has a separate receiver for receiving calls and is waterproof. It even has a noise-cancelling function for both transmitting and receiving audio. It has a large display and an easy to operate menu system. Another great feature would be the water activated emergency strobe light.

There are lots of handheld Marine Radios out there but, we chose the HX870 as the best handheld radio so far because of the features it has. It is very easy to use and it is inclusive of so many components such as the USB Port and the water activated emergency strobe light. Amazon has rated it 4.6 out of 5 with great battery life and sound quality. It is also easy to use. The GPS feature, according to an Amazon reviewer, is “best to date on any marine handheld”. They continue saying that the operating system is “intuitive, easy and makes the instruction manual a non-essential add on”. It even floats when on water! So, you don’t have to dive for it if it goes overboard. Another reviewer even says the HX870 replaced their trusted HX370S which they consider an old friend. That must be a good sign!

This two-way radio from the reliable ICOM brand is a fixed mount marine radio. It is another DSC radio with an internal GPS inclusive of an external puck antenna. It is waterproof with large LCD and has a soft key menu operation with a channel-change mic.

With a 4.7 out of 5 rating and a rank of 13 in the Marine Two-Way radios, the M330G takes the “best fixed” title. Its features are great and its price is affordable. The item is 18 x 10 x 6 inches and it’s known for being easy to install, easy to use and has great value.

“ICOM is always a name you can count on!” – Amazon Reviewer

What’s this? Another VHF radio with a built-in GPS and a DSC feature? Yep! That’s right! Except this time, the Eclipse-series is slightly cheaper than the rest. This is a fixed Marine Radio with radio controls on the microphone. From DSC calling to navigation, this radio has tons of features. You can make calls such as a position report using this radio and it has a separate Channel 70 receiver.

The Eclipse-series Marine Radio has a 4.6 out of 5 rating and is ranked 28 in Marine Two-Way Radios. The Eclipse-series is a user-friendly, powerful radio that comes at a cheaper and affordable cost making it a really eye-catching product.

HOW WE PICKED THE BEST PRODUCTS FOR THIS ARTICLE

Of course, this was the biggest part of the criteria. We wanted to make sure that the radio had a GPS and it had really great features that could help achieve the goal of helping you at sea when you’re in distress or when you need it. We wanted to make sure that each product would, as much as possible, suit you by having really useful features that really help you and that make it the best.

It’s important to note that the two-way marine radios are not as cheap. But we tried to not go for the really expensive ones as long as they had great features, reviews and usability. We tried to keep these products as affordable as possible to make it more appealing and so that it would be more widely available to everyone.

This is another part of the criteria. We wanted to make sure that each radio was easy to use or, if it were a fixed radio, easy to install so that you wouldn’t have to do extensive research and you could easily call someone or do something when you’re in distress. Usability is another big part of the criteria for choosing the products.

What is the best VHF Marine Antenna?

The Tram 1607-HC 46-Inch VHF Marine Antenna is the best VHF marine antenna. It covers all marine band frequencies and has a heavy duty fiberglass construction.

What is the recommended VHF Radio Mounting Bracket?

The recommended VHF Radio Mounting Bracket would be the ICOM MB69 Steel Flush Mount Kit. This is used to mount radios onto your console and is packaged with two brackets.

Where can I get these Marine Radios?

All these two-way Marine radios are available on Amazon.

What is the DSC feature?

So, if you’ve noticed, all the radios we’ve chosen for out top 5 has the DSC feature. DSC stands for Digital Selective Calling. Thanks to the DSC feature, mariners can send distress alerts to the Coast Guard or other rescue authorities as well as allows these mariners to privately call other DSC-equipped vessels. This is a great feature because you can avoid the interference of emergency radio channels. In doing so, you decrease non-essential radio traffic on emergency channels.

VHF Marine Radios are two-way radios that allow one boat to contact other boats. This allows for instant communication between boats. You can call the United States Coast Guard if you’re in distress and could save your life in an emergency. Once again, introducing the top 5 Marine Radios we have chosen.