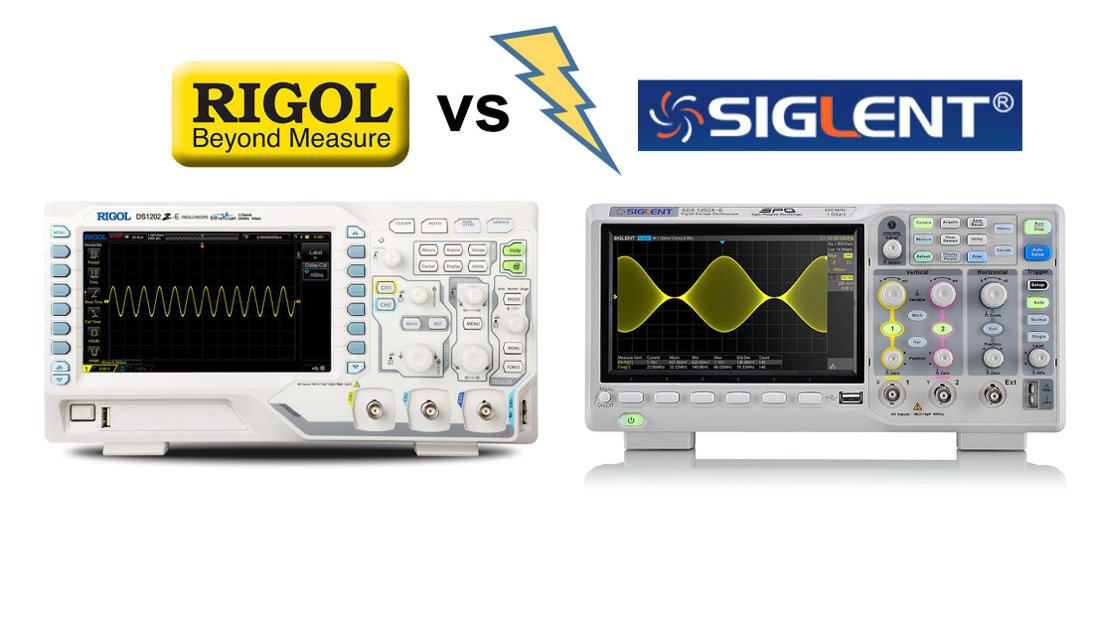 When it came to picking a scope for the lab, there was a time when the topic of discussion used to be Rigol vs Agilent. However this has now been replaced with Rigol vs. Siglent.

Both Chinese companies, Rigol was founded in 1998 while Siglent was founded four years later. These instrumentation companies have been growing their presence in North America and Europe quite rapidly and their scopes are on lab benches everywhere.

For this article, we decided to take a closer look at their products to understand how they differentiate and which one might be the better value for money. So without further ado, let’s get right down to it.

While there are many product variants with multiple channels and bandwidths, we decided to focus on an oscilloscope at a reasonable price point with specifications that will cover most applications. For the comparison we picked a two channel oscilloscope with 200 MHz of bandwidth.

The Rigol DS1202Z-E vs. the Siglent SDS1202X-E. These two products are very similar right down to their product numbers – 1202.

As seen from the comparison table above, the Siglent SDS1202X-E has more memory and processing capability. For instance the larger FFT size of 1 Mpt, you get 60x higher frequency resolution. This allows you to see more closely spaced signals in the frequency spectrum. In addition, the waveform record and playback of the Siglent is far better than the Rigol. With higher speeds you simply see more of the signal than you see at lower speeds. Finally, Siglent SDS1202X-E is 37% lighter – another advantage as that makes it easier to transport.

Based on the comparison and the small price difference, we feel that the Siglent is a much better purchase than the Rigol. The Siglent is indeed our top oscilloscope pick for the year and we look forward to seeing what other innovation this company will bring to market in the years to come.