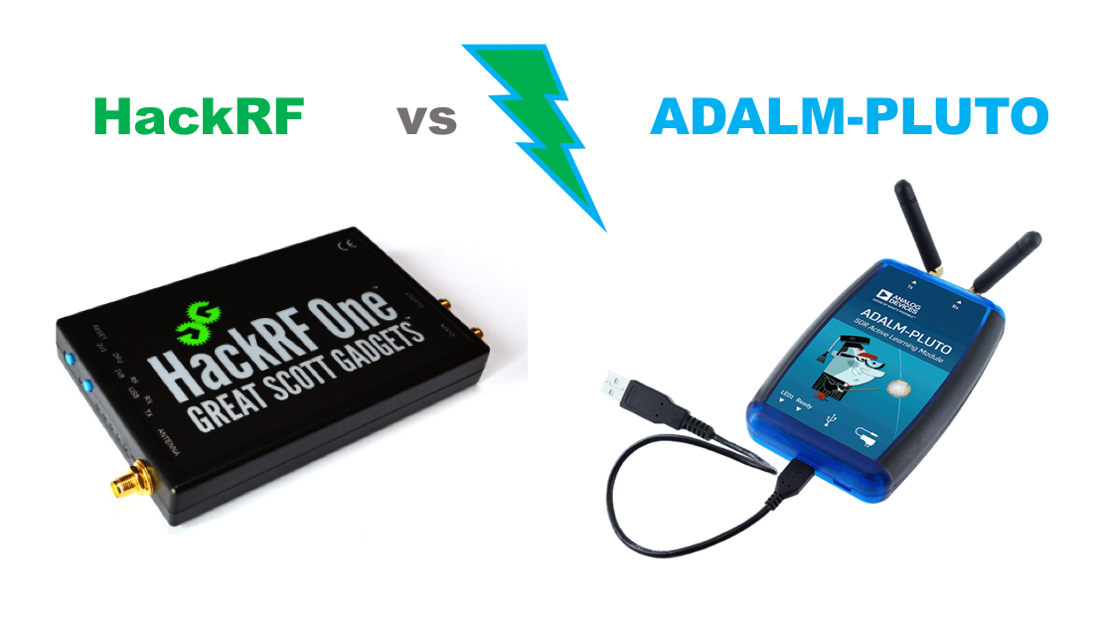 The HackRF was introduced in 2012 and has gained rapid traction within the software-defined radio community. It was the only transceiver that went up to 6 GHz and completely open source – everything from the BOM to the gerber files. Importantly it was at a very affordable price point. The integration with GNU Radio is very good and there are a number of other software packages that have been integrated with the HackRF.

The ADALM Pluto was Analog Devices’ foray into the SDR market with a similar transceiver platform. Needless to say it uses parts made by Analog Devices wherever possible as it serves as a showcase or evaluation platform for their technology. For instance it uses the AD9363 transceiver chipset.

For this article, we decided to take a closer look at their products to understand how they differentiate and which one might be the better value for money. So without further ado, let’s get right down to it.

Here is a comparison of various hardware and system attributes of the HackRF One and ADALM Pluto SDRs.

As seen from the comparison table above, the HackRF and ADALM Pluto each have their individual strengths and weaknesses. Let’s take a look at each of the specifications and features in the table above and delve a little further into what they mean and how they impact the user.

FREQUENCY RANGE The frequency range of the HackRF goes down to 1 MHz and all the way up to 6 GHz. At the low end, this allows operation at HF which is a very popular band for amateur radio. At the high end, it allows capture and processing of signals operating in the 5 GHz Wi-Fi band. The frequency range of the ADALM Pluto is narrower and doesn’t cover anything lower than 325 MHz or higher than 3.8 GHz.

ADC/DAC # OF BITS The number of ADC bits determines the dynamic range of the receiver and transmitter. Each bit contributes 6 dB to the dynamic range – which is quite significant. We have discussed this in a separate post. The ADALM Pluto is a clear winner in this regard.

PRE-SELECT FILTERS Filters are used to eliminate signals that would otherwise result in interference. HackRF has a few filters that accomplish this. While the filter bank is not as extensive as the SDRPlay, it is better than the ADALM Pluto SDR which has no filtering.

BIAS TEE We have discussed Bias Tees in detail here. Having a Bias tee is invaluable for remote operation. However, the absence of one is not a show-stopper as the ADALM Pluto can always be complemented with an external Bias Tee.

CLK IN / CLK OUT Clock references are used for synchronization across multiple systems and also enables the use of a better quality reference oscillator. The HackRF has a significant advantage over the ADALM Pluto in this area.

HANDHELD INTEGRATIONS The HackRF has been integrated into a very useful handheld form factor called the Portapack. This makes it usable in the field without the need for an external laptop.

EXPANSION Hardware extension using GPIO connectors is not officially supported with the ADALM Pluto SDR. This is an area where the HackRF has an advantage on account of its documentation and community support.

We have provided an explanation of the differences between the HackRF and the ADALM Pluto SDR. Based on the feature differences and community support we feel that the HackRF is our top software-defined radio pick for the year and we look forward to seeing what other innovation the manufacturer, Great Scott Gadgets, will bring to market in the years to come.