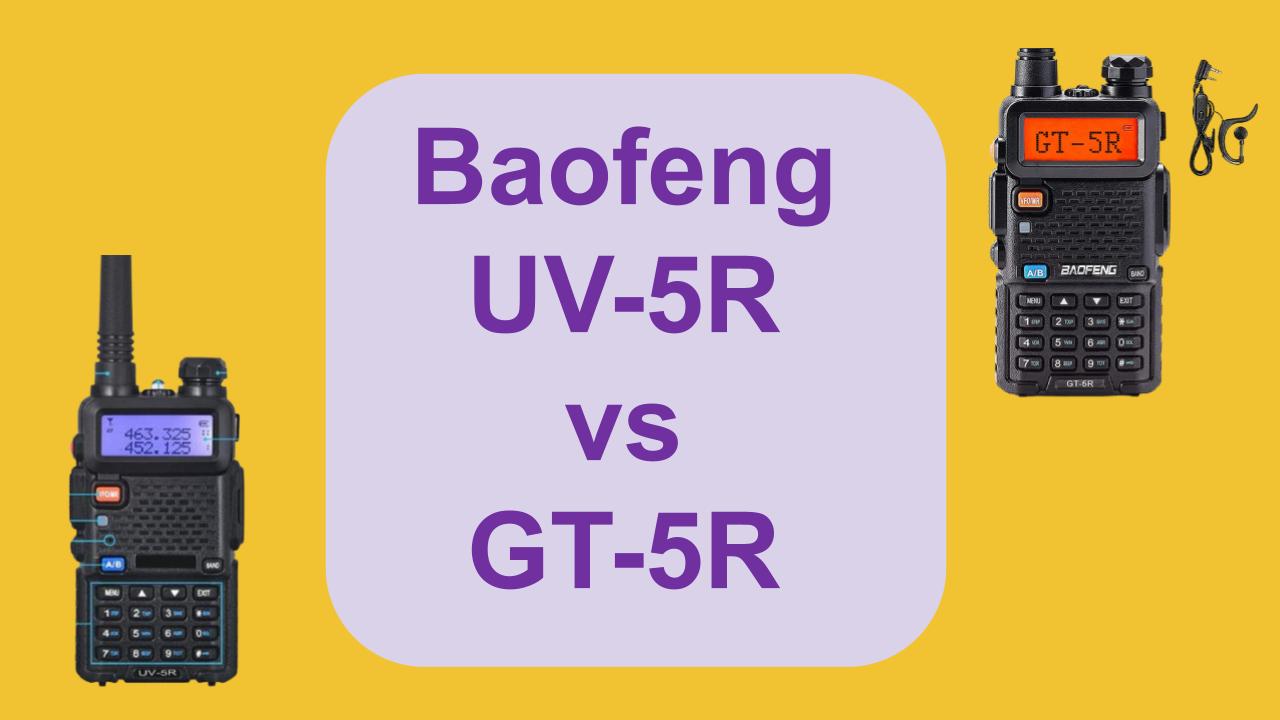 The Baofeng UV-5R and the Baofeng GT-5R are closely related, yet one does have the edge over the other, as any user who has used the two will quickly notice.

While the Baofeng UV-5R is an excellent entry-level ham radio, some users have had complaints. Apart from having a few legal concerns, some users think it’s worth nothing more than its low price.

The GT-5R, the UV-5R’s successor, comes with several upgrades to address its predecessor’s shortfalls. Amateur radio operators will want to know that much as the GT-5R bears the Baofeng name. Radioddity spearheaded the upgrade project to bring about the performance differences between the two.

Yet, you may wonder if the said enhancements actually make the GT-5R better than the UV-5R or if they solve the former’s shortcomings. Let’s take a quick look at the two products.

Key features of the Baofeng UV-5R and the GT-5R

Most users agree that the Baofeng UV-5R is a powerful and worthwhile acquisition if you seek to meet your ham radio needs. Despite coming at a pocket-friendly price, it continuously and consistently receives broadcasts from over 20 miles away.

The provision to accessorize it due to its removable antenna and battery guarantee a user receives much better signal reception and battery life. Its advanced features and beginner friendliness make it an excellent choice for both experts and beginners who have just passed their tech license exam.

Multiple users complained about the Baofeng UV-5R’s inability to transmit through the GMRS, FRS, and MURS frequencies (FCC locked), only transmitting on channel mode. The same users, though, admit that they did receive via those frequencies – one-way usage. Many users also complained about the spurious emissions beyond the recommended ham radio bands. As it is, the UV-5R is not an FCC compliant device.

Many other users advised that it’s best to acquire it if you possess or plan on possessing a Ham operator license. The license allows one to unlock access to the MURS, FRS, and GMRS frequencies since you will be meeting FCC regulations without power and band limitations.

Many users commended the Baofeng GT-5R for being quality, worth their while, and delivering just as promised despite being cheap. Users attest that they do not need to reprogram the GT-5R since it doesn’t transmit on any unlicensed channels or frequencies, even though users can program channels within the stated frequencies.

A few other users complained about the GT-5R though finding one specific shortcoming was challenging since complaints were unrelated.

Which device you should choose – Our verdict

Before zeroing down on either the Baofeng UV-5R or the Baofeng GT-5R, you should consider; what your ham radio needs are, whether or not you hold a license, and if you’d like to meddle in configuration.

The Baofeng UV-5R is transmit locked to meet the FCC regulation for GMRS, FRS, and MURS frequencies that need licensing to access. Keep in mind users’ complaints about it occasionally transmitting on public service bands.

The Baofeng GT-5R, on the other hand, only transmits within the ham radio bands and nothing more. Entry-level amateur radio users who don’t wish to run the risk of unlawful transmissions should consider the GT-5R, which will keep transmission within ham radio bands.