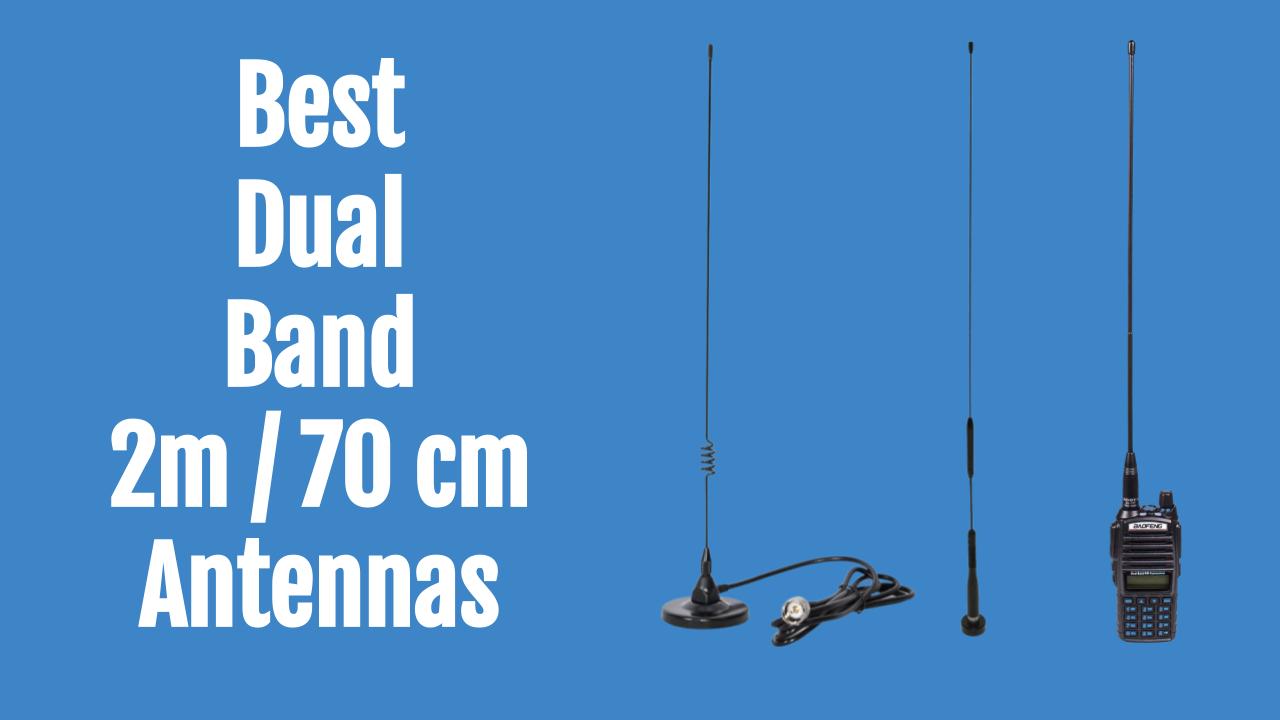 Dual-band mobile antennas are widely used in amateur radio applications because of their ability to work in two bands simultaneously or one at a time. These antennas can provide a stable connection even in difficult-to-reach locations. Choosing the right antenna with correct impedance and gain can be complicated.

We have done the research to find the top three dual-band antennas for you. This article also includes a buying guide to help you make the correct choice.

Before we get into the details, let’s take a quick look at our top picks

VFAN Dual Band Antenna “This antenna has good SWR at 440 very good at 144 and even pretty fair off band at 462-467. I get very good signal reports at all three ranges. The magnet is tough, and sticks to my STEEL car and truck roofs.”

Comet SS 680SB NMO Mobile Spring Antenna “The antenna is mounted to the top of a 2016 Prius and it still allows me to go into underground parking at approximately 6’10”. I would recommend this antenna to anybody who needs dual band performance in a small roof mountable antenna.”

Nagoya NA-771 Dual Band Antenna “The Nagoya antenna allows 100% of the signal to be radiated in the clear – other than minor cable losses. Much improved reception. With a couple of these antennas and line of sight conditions you can easily make 60 – 70 miles.”

This mobile radio antenna comes with a strong rare earth magnetic base for carefree adhesion on your vehicle’s top. Since the rare earth magnet is more powerful than iron magnets, the antenna doesn’t fly off even at high speed.

The antenna connects to the radio with the help of a 6.6 ft long heavy-duty RG58 cable and PL-259 connector. The antenna is 18 inches in height and 3 inches in base diameter.

The antenna can operate in 2m and 70 cm bands, making it functional in cities with tall buildings or with physical obstacles that can impede a radio transmission.

The antenna has a waterproof stainless steel body. Being recommended to be mounted vertically, this omnidirectional antenna can receive signals from all directions. The antenna is compatible with BaoFeng radios: UV-82X, UV-5R, BF-888s, BF-F8HP, BTECH Handheld Radios: GMRS-V1, MURS-V1, UV-5X3.

With 4.5 out of 5 stars, this dual-band antenna has many satisfied customers. According to users, the antenna offers good SWR at 440 MHz and very good SWR at 144 MHz. Users find its magnetic base attaches firmly to the roofs of cars and trucks. Even at an average speed of 75 mph, the antenna never slipped from the car roof. The only precaution is that the surface of the car must be free from dust particles for scratch-less adhesion. A minor drawback is cable length as shorter cable limits the antenna’s mobility.

This ham radio mobile antenna has a spring base to bend freely when in contact with bushes, tree limbs, garage doors, etc., without breakage. You can connect the antenna with the radio using an NMO connector.

The outer diameter of the base is two ⅛ inches and requires a ground plane for mounting. The length of the antenna is 27 inches and can broadcast at the maximum power of 80 Watt.

With 4.9 out of 5 stars, this antenna has won the hearts of its users due to good gain and a good SWR. According to its users, it has outperformed many competitors’ antennas. Its reception and performance are good and crystal clear. One of the users mentioned that they could go into underground parking easily with the antenna mounted because of its flexible spring base.

This 16 inch long antenna is a good choice for indoor and outdoor usage because of its flexibility and ability to withstand rough use and pressure. It comes with a rubber spacer and an extended antenna cover to protect the connected radio base.

Since the antenna is long enough, it can easily hear the weak stations and boost the weak frequencies. The antenna can transmit a maximum power of 10 Watts and an impedance of 50 Ohms.

Nagoya has a partnership with BTECH. BTECH is situated in the USA and deals with radio-related products only. So you can get immediate support from BTECH in case of any issue. Note that many “fake Nagoya” antennas in the market come with high VSWR and damage your radio. Nagoya has taken a step to counter this issue. They deliver the antenna in green-colored round-cornered poly bags with a printed barcode and BTech logo seal.

With more than 18000 reviews and 4.5 out of 5 stars, the Nagoya antenna performs quite well for its users. One of the users stated that the antenna is extremely useful in environments where the radio gets frequent bumps. According to users, the antenna has extremely low VSWR even in noisy environments. The build is sturdy, and its users consider an extra cable length a plus. Some users have had a disappointing experience and on further review it was due to the fact that they had bought a fake antenna.

Antenna gain measures antennas’ ability to radiate the signals in a specific direction effectively. dBi is the measurement unit of antenna gain. If antenna gain is high, i.e., eight dBi or above, the antenna radiates the signal in a narrow and straight pattern. Such antennas can work well in flat areas without obstacles along the way. Antennas with medium gain, i.e., 5dBi to 6dBi, can perform well in the suburban and countryside areas because of a wider transmission pattern than high gain antennas. At the same time, the unity gain antennas (with dBi around 2) don’t get affected by the obstacles on the way because of an even wider transmission pattern.

The amount of mismatch between the antenna and the connected feedline is called the Standing Wave Ratio. It is the ratio of power transmitted, and the power reflected. Tuning your antenna for an acceptable SWR is important for successful transmission. The SWR in the range of 1.0 to 1.5 is considered ideal and can be achieved with proper tuning and antenna mounting. SWR within 1.5 to 1.9 gives an adequate performance. SWR in the range of 2.0 to 2.4 is acceptable but should be adjusted soon. Using this range for longer may damage your radio. The range of 2.5 to 3+ might damage your radio and is not an acceptable range.

A dual-band mobile antenna with acceptable SWR and appropriate antenna gain fulfills the requirements of most users. Moreover, the length of the antenna and the connecting cable also play their role in the overall performance.