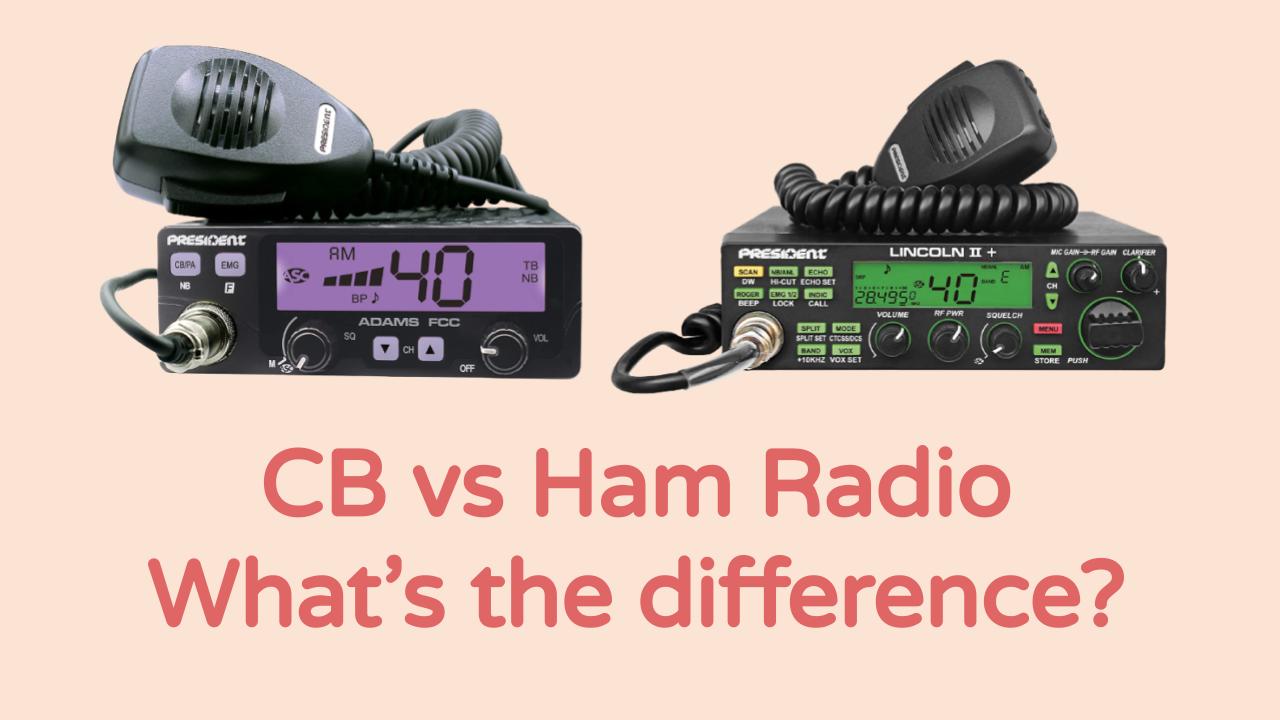 Most of us who grew up with smartphones and tablets – especially in urban areas – are not aware that there are a vast number of other options that are used worldwide for wireless communications.

In this post we are going to discuss two such options that are extremely popular worldwide: CB radio and HAM radio.

We’ll highlight the main features of each communication technology and explain similarities and differences.

What is CB Radio?

CB radio is an acronym for Citizens Band radio. It is used for person-to-person or person-to-group voice communication. The users that want to communication share a single channel. The radios are normally in receive-only mode. A user wanting to talk has to press a push-to-talk (PTT) button. Only one person on a shared channel can talk at a time.

CB radios are easy to setup and do not require a lot of technical know-how.

CB radio can be used for short-range radio communication by the general public. CB is frequently used by radio hobbyists such as truckers, family members on a hiking trip, motorcyclists, RV-owners and those needing to communicate over relatively short distances ranging from 1 to 20 miles. The maximum range will vary with terrain. In mountains the range may be limited to just half a mile.

Truckers often use CB for obtaining traffic information and for help with finding directions.

CB systems can use 40 channels in the 27 MHz band.

Principles of physics dictate that the frequency used is inversely proportional to the size of the antenna required for efficient propagation.

For this reason, relative longer antennas are required for the low frequencies that are used by CB radios. For comparison, antennas for CB radio are larger than those required for FM radio.

Regulations restrict maximum transmit power to 4 Watts on the Amplitude Modulation (AM) band and 12 Watts on the Single Side-band (SSB) band.

A CB radio setup is comprised of a radio, antenna, a microphone and a speaker.

CB radios are available in handheld and mobile versions. In another post we have compared the top rated CB radios.

The handheld units come with an integrated antenna. The antenna for a mobile or fixed radio has to be purchased separately.

The antennas for CB systems are relatively long with a minimum length of 8.5 feet (102 inches). People who prefer not to use 9 foot antennas on their vehicles can use smaller ones, but the drawback is that the range is reduced.

Many CB antennas have coils as in the picture above. This is done to reduce the physical length while maintaining the electrical length.

CB is a service that is available for the general public and does not require a license. However, to ensure that CB systems don’t interfere with other systems and frequencies, an upper limit has been applied on the maximum power that a CB radio is allowed to transmit.

What is Ham Radio?

Ham radio is also known as amateur radio. The term “amateur” refers to the fact that use of Ham is only allowed for non-commercial or non-for-profit purposes.

Unlike the Internet or cellular networks, Ham does not rely on millions of miles of buried cables or vast data centers that can get damaged by man-made or natural disasters. The modern telecommunication network infrastructure is not only vulnerable to power outages and disasters; it is also vulnerable to hacking. And sometimes human error causes massive communications outages, as happened recently with Facebook.

Ham is attractive for many users because it gives them independence and self-reliance. These radios can be used for country-wide and worldwide communication.

As in the case of CB, a HAM radio channel is shared between multiple users: one user can transmit at a time by pressing the PTT button on the radio.

Use of HAM requires more technical knowledge than CB radio.

Ham radio allows uses to communicate over long distances without having to use or rely on the Internet or other network infrastructure such as the PSTN or cellular networks.

Ham radios are used by:

Table 1 shows a summary of frequencies that are allocated to Ham radio. Please note that allocations shown are those made by the FCC for the USA. Allocations in other countries may vary.

The maximum allowed transmit power for Ham radio systems is 1.5 kW. Most radios are however limited to 50 W. Mobile Ham units typically allow 10 to 100 W of power output.

One of the major advantages of HAM is that thousands of HAM repeaters are deployed all over the world. Through repeaters, communication can be established with users located hundreds of miles away.

A Ham radio setup is comprised of a radio, antenna, a microphone and a speaker.

The handheld units come with an integrated antenna. The antenna for a mobile or fixed radio has to be purchased separately.

HAM antennas for UHF/VHF bands requires a minimum length of 19.5 inches. The smaller antenna size makes it easier for vehicle mounting. Antennas longer than 19.5 inches can be used for increased gain and range.

Ham radios are not allowed to transmit without a valid license.

As an analogy, consider the road-based traffic network. It there were no rules, and everyone did as they liked, then the network would become unusable. Therefore, drivers have to learn the rules, get a license and then follow the rules while driving.

Similarly, Ham users are required to obtain a license before they can transmit. The basic Ham license applies to lower power and frequencies with limited range i.e. UHF/VHF. The advanced HAM license is required for HF and designated frequencies.

A Ham license is required for many reasons:

Similarities between CB and Ham Radio

Both CB and Ham Radio:

Differences between CB and Ham Radio

Can you use a HAM Radio as a CB?

Frequency bands that are allocated to the two services are different. Therefore, a Ham radio cannot be used as a CB radio or vice versa.

Are CB and HAM Radio antennas the same?

Can a radio perform as both HAM and CB radio?

The FCC has decided that a CB/Ham combo radio is not legal.  Therefore you have to buy different equipment (radio + antenna) for CB and for Ham.

Is HAM Radio the same as CB Radio?

There is no apples-to-apples comparison between CB radio and HAM radio just as there isn’t between cellular phones and satellite phones.

Both technologies were developed for different use cases. Even though both use wireless technology, there are differences in the technology implementations and in the regulatory requirements.

At the end of the day you can pick either Ham radio or CB radio depending on your use case and requirements.