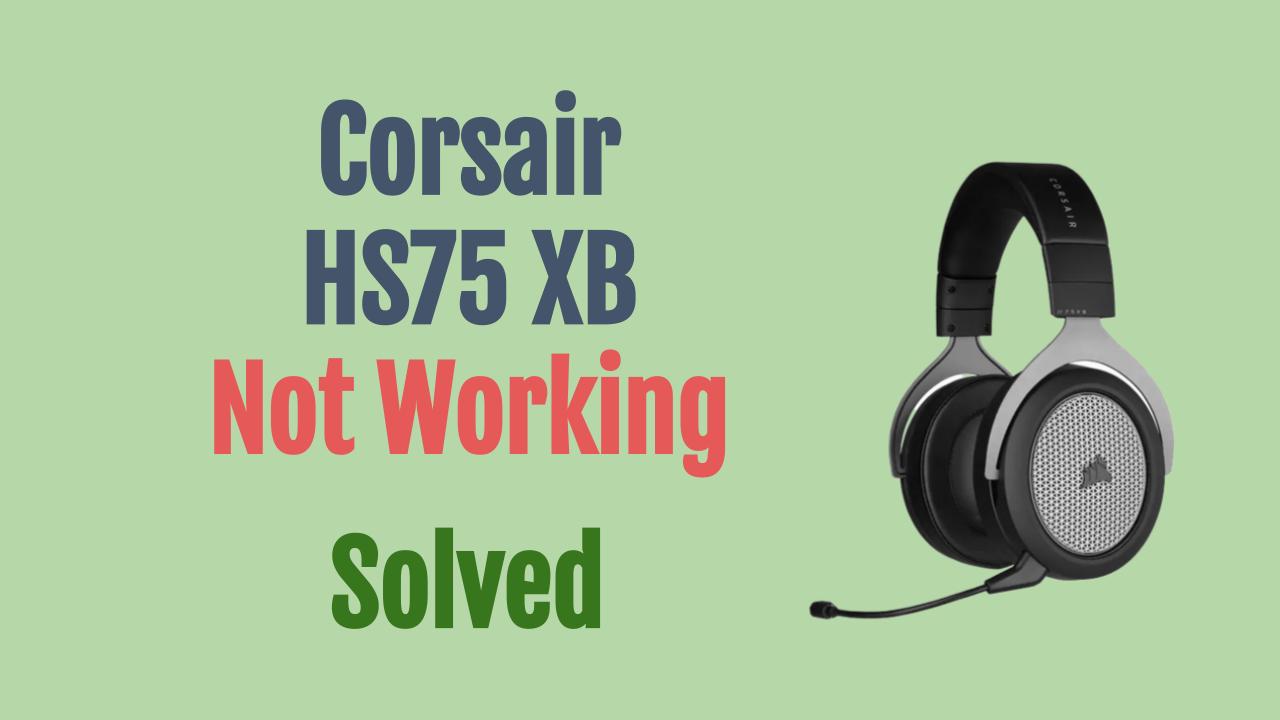 I was very excited to have bought the Corsair HS75 XB wireless gaming headset but then ended up facing multiple issues. The many problems with the headset made me think of returning them.

But it’s a good headset, so instead I decided to look into solutions for the problems.

I’ve had an issue with the Corsair HS75 XB headset where it freezes and becomes unresponsive. In this case, the headset:

Sound issues with the HS75

The next issue I experienced with the Corsair HS75 XB is choppy sound when connected to the XBOX. Some users have similar issues where the audio cuts out intermittently or static with frequent interruptions. In general it’s not a good audio experience.

Please note that sometimes the issue is with the Xbox Console and not the headsets. If the above-mentioned reboot procedure doesn’t work, try rebooting or updating the firmware on your Xbox.

The HS75 uses wireless technology to connect with the Xbox. This operates in the same frequency band as Bluetooth, Wi-Fi, Microwave Ovens and other wireless devices. As a result when these devices are working at the same time, they can interfere with the HS75.

To reduce radio frequency (RF) interference, remove these devices from around your Xbox and the HX75.

Corsair HS75 XB has a buzzing sound in the left cup

Multiple users have reported that this headset, when turned on, has a constant buzzing sound in the left cup. This sound is more prominent when the headset is on, but no audio is playing. The sound goes away or becomes minimal during the audio play and becomes noticeable otherwise.

The only solution to this annoying problem is to turn off the other wireless devices including W-Fi in the surroundings to limit the RF interference. No firmware update or Reset resolves the issue.

The solution to this problem is to press the power button and count for 3 seconds in your head. Release the power button. The headset will power off. If you press it for longer than three seconds, the headset won’t turn off but will go into pairing mode.

Since there is no physical battery level indicator, users can only look at the battery percentage in Corsair iCUE software. Some users complain that the software shows 94% battery level even after charging the battery overnight.

Also, the power light behavior is confusing for some users. According to the instruction manual:

But the amber light doesn’t stay on during charging. When plugged in for charging, the headset indicator shows amber light for a while, and then it goes off. This light never turns solid white, even if the battery is full.

Since there is no physical battery indicator, the software measurement is an approximation. Even if the software shows 94% on a full charge, it will have full battery usage life.

As far as the power LED indicator is concerned, the observed pattern is as under:

Does the Corsair HS75 XB use Bluetooth?

No it does not use Bluetooth. The HS75 XB is designed for the Xbox and uses Microsoft’s proprietary wireless technology. To use it with a PC will require an Xbox wireless dongle.

How to connect the Corsair HS75 XB to a PC?

The HS75 XB is a wireless headset that connects to Xbox. It does not use Bluetooth. Instead it uses Xbox wireless – a proprietary wireless protocol designed by Microsoft.

In order to connect the HS75 XB to a PC you will need to purchase a USB dongle. The dongle plugs into a USB slot and communicates with the headset.

How to factory reset the HS75?

There is no way to factory reset the HS75 and take it back to original settings. Instead there is a procedure to soft reset the device.

How to update the firmware of the HS75?

You will need a PC to run iCUE and follow the instructions here. Unfortunately there is no way to update it using the Xbox console. It’s not possible to update in any other operating system (MacOS or Linux for instance).

In this post, I have listed all the possible issues with Corsair HS75 XB wireless gaming headset and possible solutions. Let us know if you have issues that are not covered in this post and we will do our best to help you resolve them.