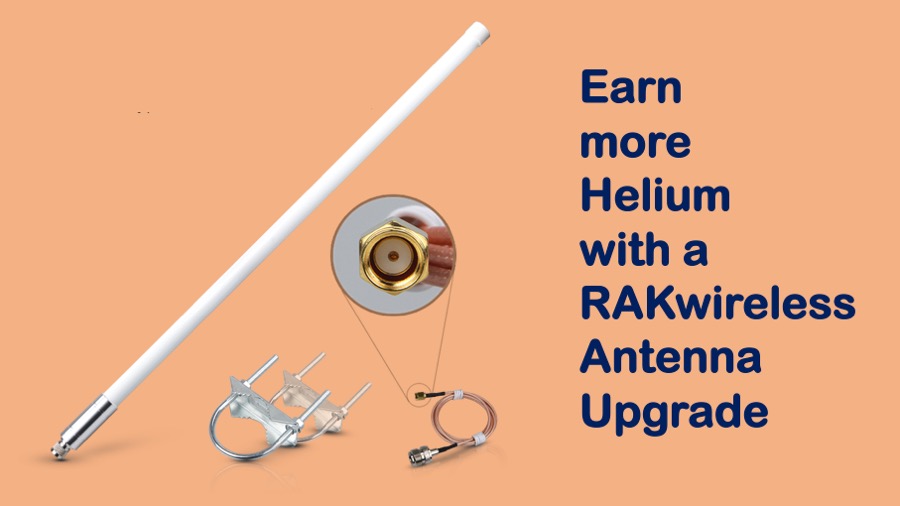 A Helium miner or hotspot comes equipped out of the box with a good antenna so you can start mining. However, you can boost your earnings easily if you optimize your antenna and its location.

Now without further ado, let’s get into the details.

How do you earn Helium tokens?

To earn Helium tokens, you have to buy and set up a Helium miner. A miner earns HNT when it is able to witness other miners. This is called Proof of Coverage (PoC) and is a measure of how good your miner’s performance is compared to others and how much this benefits the network. Witnessing is done via sending and receiving RF beacons.

There is also another way to earn HNT and that is by relaying data from Helium IoT devices such as pet trackers, temperature sensors and the like. Today miners don’t earn a lot of $HNT this way as there aren’t that many IoT devices around. The Helium network is in its infancy. But over time it is anticipated that this will increase significantly. There is an expectation that there will be many billions of IoT devices in the next few years.

How do you earn MORE Helium tokens?

A Helium hotspot relies on communication with other miners and simply put, the more hotspots that it can reach, the more the earnings.

So, the question is – how to maximize the range of a miner?

A miner includes a radio communication system and like a cell phone or a two-way radio, the simplest ways to improve range are 1) to improve the antenna 2) to place the antenna in a location where it has direct line of sight (LoS) so it has better visibility of nearby hotspots.

Every antenna has a gain number associated with it. Antenna gain measured in dBi, is a measure of how well it is able to focus its energy in a particular direction, compared to an isotropic antenna.

The stock antenna that ships with a RAK miner has 2.8 dBi gain for EU and 2.3 dBi gain for US while the RAK Fiberglass antennas have gains of 5.8 dBi and 8 dBi.

So, the obvious question is: why not always pick the antenna with the highest gain? The simple answer is – Antenna gain does not come for free. The higher the gain of an antenna, the more focused its energy. Take a look at the pictures below that show how the antenna radiates energy as a function of gain.

As the antenna energy becomes more focused, there’s a good chance that you will not be able to communicate with other miners that fall outside of that beam.

Which antenna should I pick?

Where should I place the antenna?

Your antenna should always be placed at the highest point you are able to safely reach. The roof of a house is an obvious choice. However, we do not recommend you climb a roof when you are not equipped or trained to do so. There are many installations that benefit greatly from a roof mount but they can be expensive as you often have to pay a professional to get the work done properly. Additionally, you might have to get permission from your homeowner association. The RAKwireless antenna has a very convenient magnetic base that can be used to mount the antenna indoors. The best place for indoor positioning of an antenna is in the top floor of your house by a window and many times an attic works as well as a rooftop.

Let’s take a closer look at the specifications of one other RAKwireless Fiberglass antenna (8 dBi one) and what they represent.

In the frequency range 900-930 MHz, the peak gain is 8 dBi. This means that compared to the stock antenna it will amplify the signal close to 4 times more, allowing it to reach much further. For example, in the picture below, an 8 dBi antenna is used to communicate with a hotspot that is almost 60 miles away across the water.

The Voltage Standing Wave Ratio (VSWR) is less than 1.5. VSWR. It is a measure of how much power delivered to the antenna is reflected back into the receiver. A VSWR of 1 is ideal as it represents no reflection of power (also not attainable in practical conditions), while a VSWR of 2 is considered good. The RAK antenna exceeds this specification and the measured VSWR at 910 MHz is 1.2 which represents a very good match, a minimal loss due to input impedance mismatch.

The RAKwireless radome is made of fiberglass, making it quite robust and impervious to the elements (it is IP67 rated). This is one of the most important aspects of the antenna – that it is outdoor capable and can be mounted high up with LoS to other miners. This in turn eliminates a lot of the attenuation due to obstacles in the signal path resulting in a lot lower path loss and a log greater range.

We recommend experimenting with your miner setup to try different antennas such as the RAKwireless 5.8 dBi and 8 dBi antennas so as to maximize your HNT earnings. We recommend placing your antenna at the highest point possible, so that it maximizes connections with other miners.