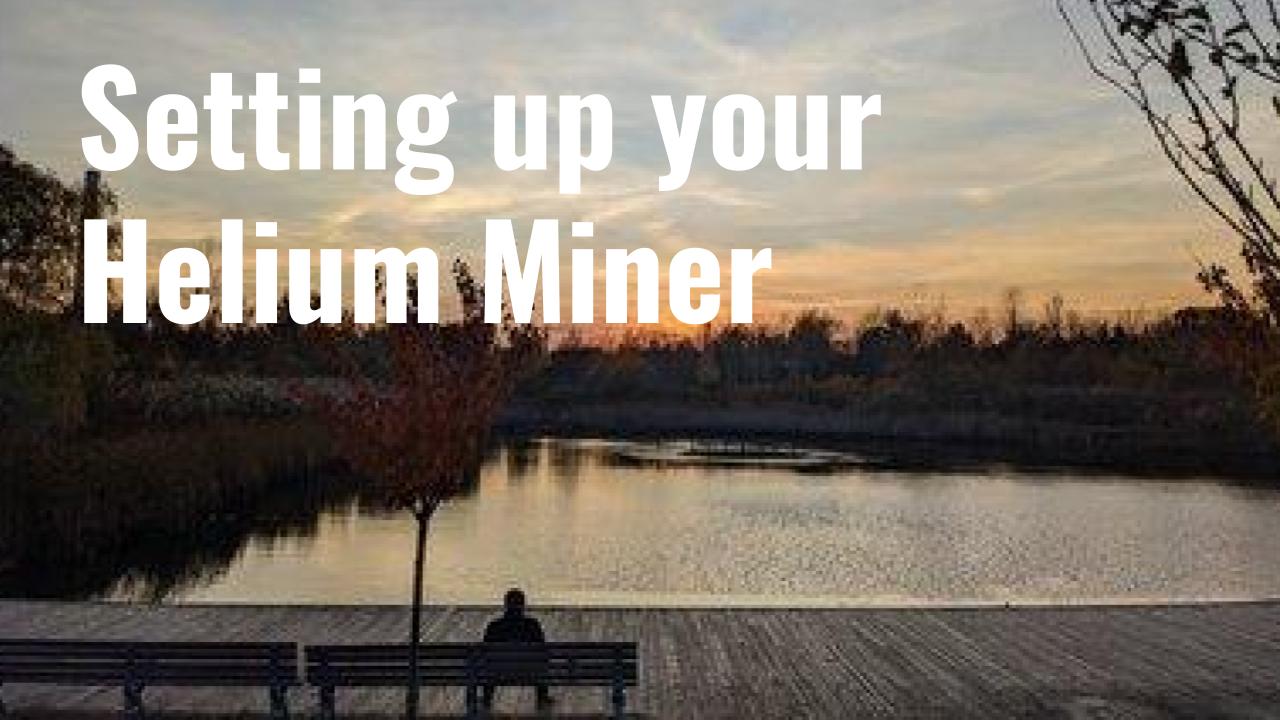 In this introductory post I’m documenting my experiences setting up a Helium hotspot for the first time. The plan is to update it on a regular basis. I hope this helps you if you’re doing the same.

The long wait time for a Helium hotspot has given many people an opportunity to plan where they are going to place it once it arrives. You may want to experiment with a few different locations. The ideal point is the top floor of your house, or near your balcony if you live in an apartment building. Most Helium hotspots ship with a low gain omni antenna so it might also be worthwhile to consider antenna options.

Once you receive your Helium miner, what’s next?

Powering up your miner for the first time

How to Connect your Helium Antenna

The antenna should not be at an angle as in the picture below.

Here’s how to connect your stock antenna

There are two adjustable parts to the antenna as shown in the picture below.

After you have powered up the hotspot, you will be able to connect to it via the Helium app on your phone. Make sure you have Bluetooth enabled on your phone. The first thing to turn on is the yellow LED. Then the green LED above it will start blinking. Only after it starts blinking can you connect to it, not before. There are differences between hotspots. For instance a Rak hotspot will give you a longer window of time to connect relative to a Nebra hotspot.

You will be asked to connect to a network and set a location. You may want to use an Ethernet network as opposed to your Wi-Fi network as the wired Ethernet connection is way more reliable and it will sync to the block chain a lot faster. Once synced you can later switch over to Wi-Fi connectivity. We have discussed network connectivity in a post here.

Okay so now let’s get into some of the details of my experiences setting up a hotspot. The first Helium miner I purchased was from Rakwireless and setting that up was very easy. I suspect that was due to the fact that Rak was the manufacturer of the original Helium hotspots and they had the opportunity to sort out many issues and bugs before shipping in volume. The Rak miner is also built very well. Although I have to question the use of aluminum enclosure with an internal Wi-Fi antenna – definitely not the best for wireless network connectivity.

Okay so now for my experience with the Nebra miner. I ordered a few of these and they were delivered six months later.

The Nebra miner is not as well built as the Rak miner. However I really love their open source design. While the plastic enclosure might appear cheap, it is way more practical for Wi-Fi connectivity. The parent company has many years of experience building electronics kits but I suspect they were not well equipped to deal with the high demand and customer expectations for their Helium products. They are doing a good job catching up to meet demand and I think they will do well moving forward and in the future.

As I was setting up my Nebra Helium hotspot for the first time I encountered this error message Hotspot not found on onboarding server or No onboarding key found. Even though I powered the device down and up a few times, I still got the same message and was not able to move forward with setting up my miner.

So I contacted the team at Nebra and got them to look into it. Their support system is quite overwhelmed these days and they recommend not emailing them multiple times with the same problem. This will only slow down their support response.

Once I got in touch with the team they went through various checks. The first one was quite simple – to ensure that the LEDs light up as expected. Both external and internal to the unit. Mine did.

The next one was to re-seat the Raspberry Pi processor card (shown below) into its slot. The processor card can be dislodged during transport and I suspect it is something they will have to fix for the long term and in a future revision of the hardware. Relatively straightforward as well. The Nebra hotspot lid comes off quite easily – no tools needed.

Finally it was agreed that the issue was due to the fact that the hotspot had failed to register on the Helium server during the setup process. The Nebra team had to do this manually. I suspect that the reason for this issue was that the Helium server was likely down at the time I was setting up the device and hence the hiccup.

Even after the Helium team said the issue was fixed, I had to work through the setup process a couple of times before it was ready to start syncing. Each time I had to power down and restart the miner.

Once registered, the sync proceeded to completion quite fast. In fact it was done in 48 hours. I’ve heard it can take longer – sometimes a week or more. My miner is now up and running. The rewards aren’t as great as they were six months ago but on the other hand they are better than they will be six months into the future!

Today I encountered another error when setting up a miner.

There was an error constructing the Add Hotspot transaction. Please try again.

Solution: Disconnect all other syncing hotspots and try adding the new hotspot again. This should solve the problem. If the error still persists, connect the hotspot to your network using Ethernet and try again.

According to Nebra, the green light indicates what’s going on with the miner.

In the third case it makes sense to contact support at Nebra.

At least on one occasion I have found that the green light was off. When I checked the Helium app, it showed that the miner was offline.

In this case a simple power cycling appears to have solved the problem. If I were to guess – Nebra applied an over the air update and the box did not reset properly causing it to go offline.

If power cycling does not resolve the green light issue – in particular after December 2, 2021, then please read this post for what to do about it.

Green Light Blinking 8 times – What does it mean?

After the December 2021 firmware update, I have been seeing a repetitive pattern – green light blinking eight times, then off for a short period, then blinking again. No more solid green light. Not sure what this means as it isn’t documented on Nebra’s site. However the miner is actively witnessing and sending beacons. It appears to be behaving normally. So far so good.

Helium miners are relatively new devices. Most companies making these devices are relatively new to the game of hotspot production. This is likely what Wi-Fi hotspots were like about 25 years ago when they first came on to the market. Even today Wi-Fi hotspots are far from perfect. Firmware is upgraded regularly to resolve bugs. As more miners get deployed we will see many improvements and faster bug resolution too.

Check out our post on the best Helium antennas

How to increase your HNT earnings