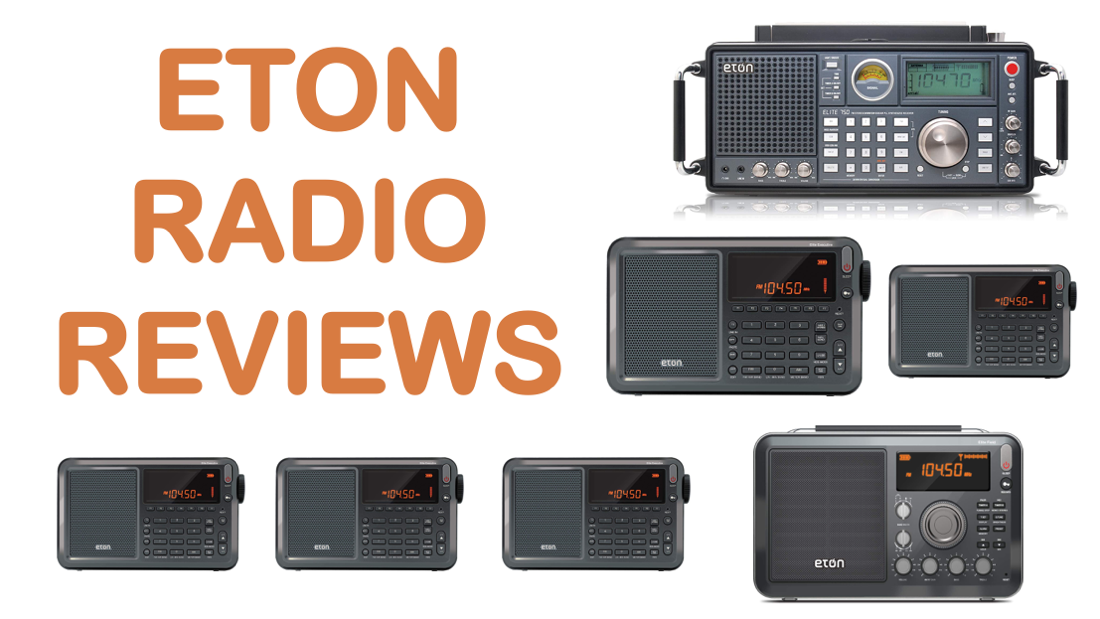 Eton Corporation is a market leader in shortwave and emergency radios. Their mission is to keep people informed, entertained and safe.

In this post we will present a review of three shortwave radios from Eton Corporation, namely the Eton Elite, the Eton Elite Executive and the Eton Elite Field. A table that summarizes the main differentiators is also provided.

The Eton Elite is an all-around radio which can be used for listening to AM, FM, LW, SW, SSB and VHF aircraft band frequencies. In fact it is our top pick for the best shortwave radios. It comes with an AM antenna which can be rotated 360º. External antennas can be used for SW, AM and FM. Advanced embedded DSP technology increases tuning sensitivity and reduces the effects of interference. The Eton Elite can store up to 1000 channels.

The Eton Elite can be powered through 4 D size batteries (not included) or can be plugging into the AC wall outlet through the supplied AC adapter. The radio measures 7.24 x 14.65 x 5.75 inches and weighs 7.1 pounds.

The Eton Elite is a great radio for general purpose listening, and can be used to say up to date with news from around the world. The unit is portable and comes with two handles for easy handling. Ability of the radio to be powered by batteries enhances its portability.

Users of the Eton Elite have been very satisfied with the great classic look, the solid build and the richness of the features supported by the radio. Users have appreciated the fact that the AC adapter supplied with the radio uses a liner transformer and does not generate RFI.

Some users have expressed a complaint that while the radio does support the aircraft band, it does not receive the military aircraft band. Some users have also complained about issues with SW reception in urban areas. However this is understandable given the amount of interference sources and clutter that is present in most urban environments. Indoor reception issues have also been cited by some users. However this issue can be resolved through the use of external antennae.

The Eton Elite Executive, like its big brother the Eton Elite, receives AM, FM, LW, SW, SSB and the VHF aircraft band. The radio features a PLL tuner for improved AM reception. It also features RDS for FM. A Sync Detector on the radio improves the audio quality by lowering fading and distortion. HD radio is supported in North America and DAB+ is supported internationally. The Eton Elite Executive also supports automatic / manual digital tuning, electronic volume / treble / bass control and includes a FM telescopic antenna. A jack is also available for external antenna input. The radio has a headphone jack and also features a line input for external media playback.

The orange LCD with backlight enhances display readability. Other handy features include alarm clock, sleep timer and world time. The Eton Elite Executive can store up to 700 stations. The unit can be powered by the mains AC supply or by using 4 AA size batteries (not included). A battery level indicator is also provided on the display.

The radio package includes the radio, owner’s manual, micro-USB cable with AC adapter and a leather case for the radio. Weight of the unit is 439 grams and it measures 4.1 x 6.6 x 1.2 inches.

The compact size and low weight make the Eton Elite Executive a very handy portable radio which can be used worldwide for listening to news broadcasts on a wide range of frequencies.

Users have reported their satisfaction with the radio and its sensitive receiver. Some users, who own multiple portable radios, have selected this radio as their favorite because of its great reception on the commercial and air bands. Most users have commended the speaker output which has been reported as being great despite the small size. Users also appreciate the transformer based analog AC adapter which does not cause RFI.

Some users have recommended changing the antenna placement. Some users have also expressed frustration as they found that the Executive was not as easy to use as they would have liked. Another complaint noted by a user was that the radio does not cover the entire FM band from 76 to 108 MHz. The FM range specified in the radio documentation is 87.5 to 108 MHz – however in many regions of the world (Japan for instance) the FM band does go down to 76 MHz.

The Eton Elite Field is a portable radio which can be used to receive AM, FM and SW transmissions. RDS is supported for FM which enables display of song title, artist and the transmitting station’s call letters. HD radio is supported for north America and DAB+ is supported internationally. External antennas can be used for AM / FM / SW. The radio can store up to 50 stations.

The Eton Elite Field is Bluetooth-ready and can be used to listed to audio files streamed over Bluetooth. It also features line in and a headphone jack. Other useful features include local / world time settings, alarm clock and sleep timer. A built-in hand strap can be used to carry the radio. Power options include AC (with bundled adapter) and 4 D batteries (not included). Weight and dimensions of the Eton Elite Field are 3 pounds and 12.4 x 6.9 x 3 inches respectively.

In general users have reported satisfaction with the build quality, reception and features which are available on the radio. FM reception on the radio has been described as “excellent” by most users.

Some users would have preferred larger buttons on the radio. Support for SSB is another thing which users would like. A slight hum has been reported on headphones when running on AC power. Some users have reported that the AM reception is “average”. However as noted by a reviewer, Eton has improved on this so that the AM reception is now improved on the newer radios.

Here is a snapshot of features that show how the three Eton radios are differentiated.

Icons made by Freepik from www.flaticon.com