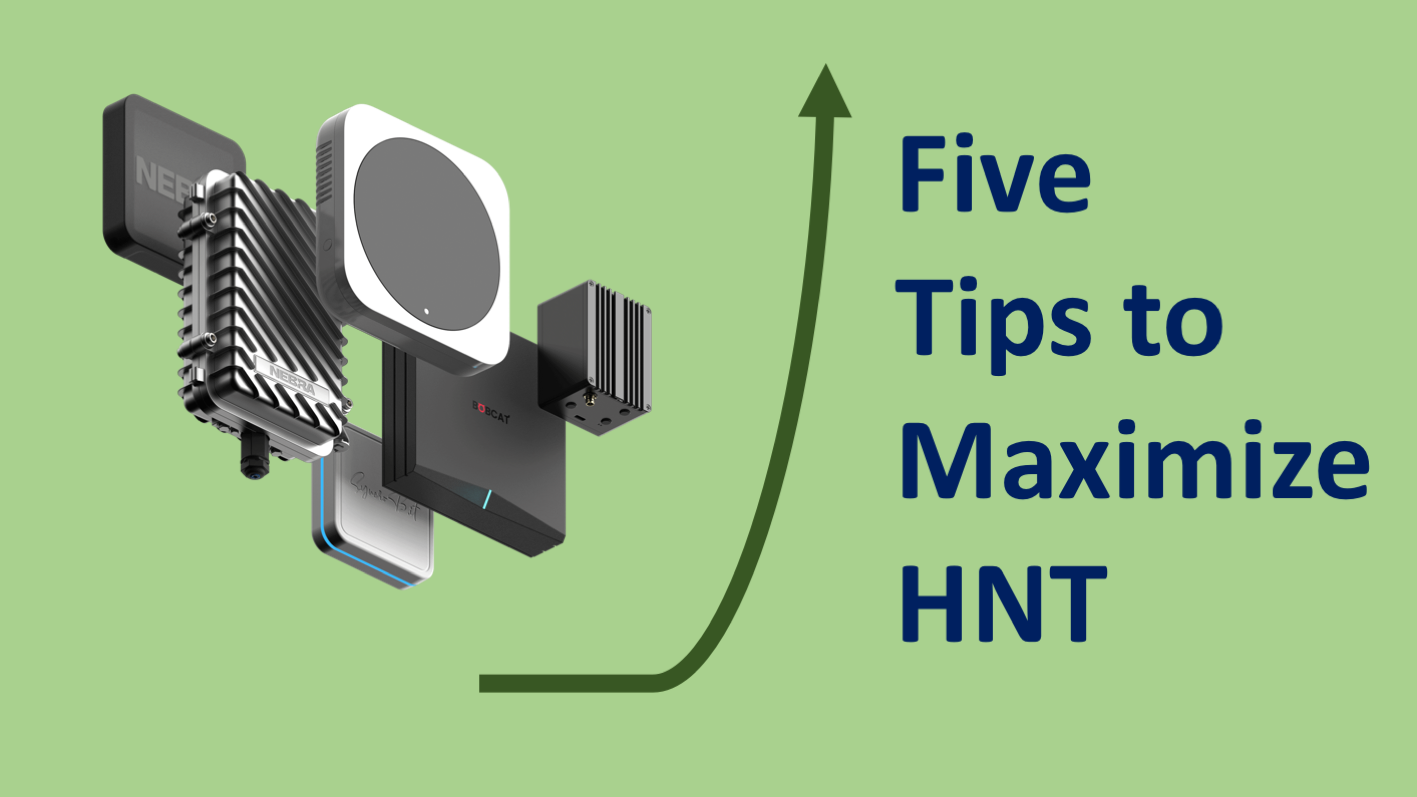 Interested in learning how to increase your Helium HNT earnings? In this guide we will give you five tips to maximize the amount of HNT earned from your Helium hotspot.

Time is HNT so without further ado let’s get started!

The #1 reason why hotspot owners have low earnings is that they have placed their hotspots in poor locations. What’s a poor location you might ask.

A poor location is one that is too close to other hotspots or one that has no hotspots nearby.

The first case happens in large cities, especially in downtown cores. Imagine having a hotspot on the second and fifth floor of the same building. Your earnings are going to plummet. Take a look at the hotspot density in New York City for instance. Needless to say this is saturated area and no longer optimal for hotspots.

There was a time when you could get high HNT earnings with a hotspot placed in a building downtown, but that is not true any longer. The only exception to this is if you are able to place your antenna on the highest building downtown and that allows you to reach locations near and very far.

Now let’s take a look at the other extreme. A hotspot that has no other hotspots nearby in Yorkton, Saskatchewan.

This hotspot averages about 0.1 HNT per day. Needless to say, not a high earning hotspot. Find a good location – one that’s not too dense with hotspots and not too sparse either. It might be that you buy a few hotspots and install them around your neighborhood. Remember that hotspots have to be at least 300 meters apart to witness each other. And like with real estate – location, location, location!

Install your antenna high above the ground

Your hotspot mines HNT when you are able to connect to other hotspots. Hotspots connect to each other using a technology called LORA which operates below 1 GHz. This form of communication has longer range than Wi-Fi for instance and it’s great for IoT applications. Like other wireless systems it works best when you have Line-of-sight. Put simply when your antenna can see other antennas, you maximize your HNT.

The easiest way to achieve this is to place your antenna at the highest point possible. For most people living in the suburbs, it’s in their attic or the top floor of their house. For an amateur radio operator this might be on a tower in their backyard. If you live in an apartment building it would be by the window.

And get a high gain antenna

Your antenna is the key to receiving and transmitting wireless signals. With all hotspots being built with the same radio hardware, the antenna makes the biggest difference. We cover this topic in more detail here and we recommend the use of a high gain antenna like the Signalplus 5.8 dBi antenna.

A helium hotspot is no good unless it can connect reliably to the internet. Of the total number of Helium hotspots in the world, only around 75% of them are online at any given time.

Install your hotspots as soon as you possibly can

Time is of the essence with Helium mining. A hotspot’s earnings will go down with time due to token halving and as the number of hotspots coming online increases. So it makes most sense to install your hotspots as soon as possible.

Take care of your Helium hotspot

I could write an entire chapter on this but let’s cover some of the basics.

Any damage to your hotspot is expensive. With manufacturers scrambling to meet hotspot demand, it is very difficult to get their attention for support requests and product returns. So take good care of that hotspot!

In this post we have discussed the top five tips to maximize your Helium HNT earnings. As a brief summary here they are: