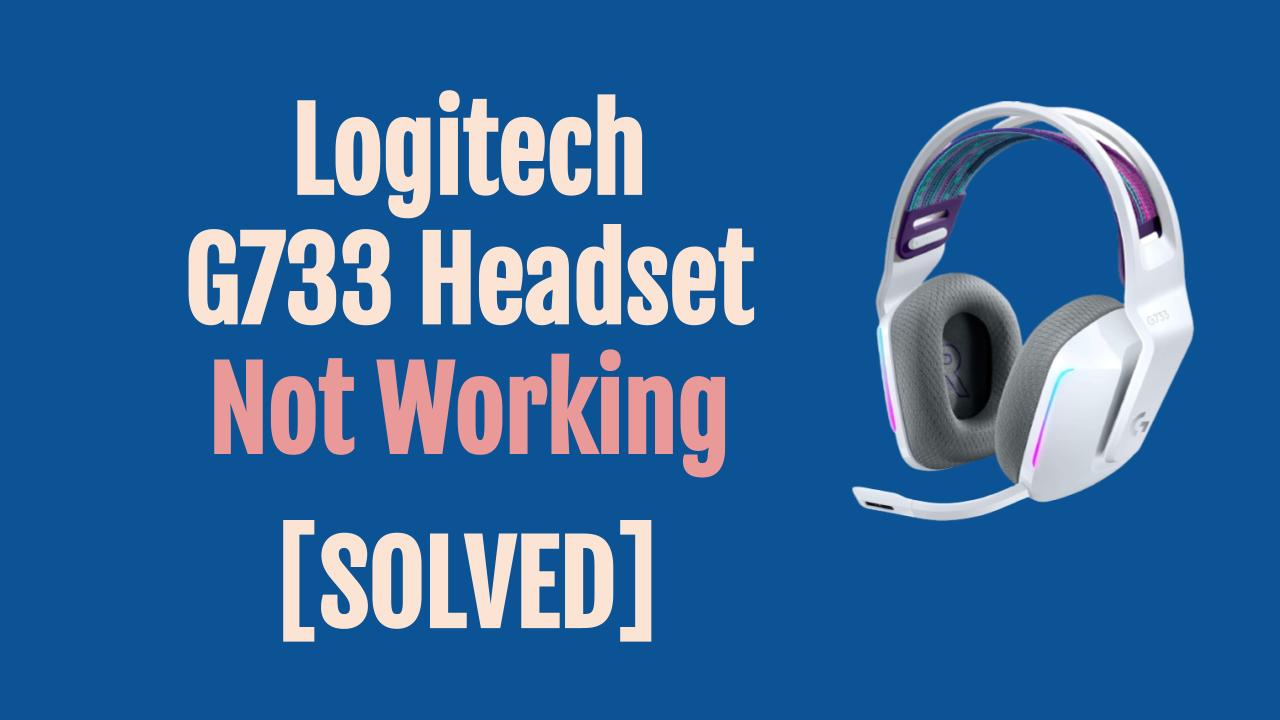 I was planning to replace my Logitech G733 because of various issues like volume wheel not working, mute button not working, and more. Then I decided to do some research to solve the problems.

In this article I have addressed all possible issues in Logitech G733 and solutions. I hope this helps you.

This headset supports Lightspeed technology and comes with a USB receiver. So the first solution is to connect this USB receiver to another PC port.

Another solution to the Logitech G733 volume wheel problem is reinstalling the website’s newest version of G Hub software.

The next problem reported by some G733 users is the mic malfunction. This issue exists even in the new, straight-out-of-the-box headsets too. The G hub software audio bar doesn’t detect the user’s audio.

The solution to this problem is to go into Windows sound settings by right-clicking the volume icon and selecting ‘Recording devices.’ Then highlight the G733 Mic, disable, and re-enable it. After re-enabling, ensure that this Mic is chosen as the default device.

Also, test the Mic to confirm that the problem exists in Mic and not a particular App you are currently using. To test

Some Logitech G733 users report the constant sound buzzing in the right cup of the headset. If they put their hand on the left cup or move their head, the sound goes away for some time but comes back again. The buzzing continues even if all the other electrical devices in the surroundings are turned off to avoid interference.

The buzzing is louder when the volume is higher, or the RGB is enabled on the headset. This noise is even more if the Pink and Blue color is included in the RGB combination.

So, one fix is to turn the RGB OFF. It will remove the static noise in Logitech G733.

Logitech G733 Not Turning On

Logitech G733 stops turning on and charging sometimes. The USB dongle is connected, but the headset itself doesn’t turn on and doesn’t charge.

Sometimes the Logitech G733 sound stops working. Even when the Windows settings say that the input and output are working, the users can’t hear anything from the headset.

The solution to this problem is:

As these solutions worked for many, you can also unplug and plug your headsets back in or change the USB port.

Another reported problem is that the Logitech G733 mute button stops working occasionally. Users can’t mute or un-mute their headsets even when pressing the mute button.

Another solution is to remap the mute button to ‘mute audio output.’ This solution will work instantly.

The LEDs inside the headset probably cause the high pitch sound or buzzing issue. If the LEDs are cheap, have poor circuit design, or have grounding issues with the controller, it causes a high-pitched sound.

The first fix is to change the LED mode from ‘breath’ to ‘fixed’ or turn the LEDs off. Another fix is to increase the brightness of the headset from G Hub software. Unfortunately, it causes more power supply to LEDs that in turn breaks out the vibration causing a high-pitched sound.

Yet another fix is to keep the charging cable plugged in a while using the headset. Again, however, it can affect the battery life in the long run.

Logitech G733 Not Showing Up in G Hub

The problem is that sometimes after a G Hub software update or for some other reasons, the Logitech G733 stops showing up in G hub. Unfortunately, that means the G733 picture is greyed and can’t be selected. The headset works fine, but the users can remap or edit any settings of the headset.

First, ensure from the Windows sound settings that the G733 is selected as a default headset. If the headset is already set to default, try the following steps.

Logitech G733 Gets Stuck on Setting Up

Reportedly, the Logitech G733 gets stuck during setup on G Hub software. When stuck, the users can’t edit the equalizer or mic settings, nor can they check the battery percentage. Unfortunately, uninstalling and reinstalling the software doesn’t fix the issue either.

According to its users, the Logitech G733 Lightspeed receiver stopped working when they had plugged the receiver back into the USB port. None of following worked

There is a factory reset button in the small hole on the USB receiver right below the logo. Press that reset button for 5-10 seconds. It will reset the dongle and get the receiver working again.

Yet another solution is to use a G933 receiver with the G733 headset. Just reset the G933 receiver until it starts flashing rapidly. Then, pair it with the headset to begin using. Please note that some options can be limited, but it will work fine otherwise.

The Logitech G733 keeps disconnecting and reconnecting for some of its users. It happens randomly and can be very annoying.

How to connect Logitech G733 with Android?

If your phone supports OTG (On-the-go) USB or if you have a USB to USB-C adapter, you can connect the dongle to your android phone. Then you can pair the headset with the dongle and start using it.

How to connect Logitech G733 with iPhone?

To connect Logitech G733 with the iPhone, use the Apple camera USB to lightning cable.

Does the Logitech G73 work with Xbox One?

What are the best Mic settings for Logitech G73?

There are no specific best mic settings for Logitech G733. However, since it supports blue voice, you can enable this feature from the Logitech G hub software.

This feature enhances the crispness and clarity of the mic output. Moreover, after allowing the blue voice, you can choose from the available presets according to your requirement. Available presets are a broadcaster, AM radio, FM radio, and high voice. You can record your voice and play it to listen to what adjustment you need to make in the selected preset.

What are the best equalizer settings for Logitech G733?

There are no specific settings that can be awarded the best settings medal. The equalizer settings depend on the purpose for which the headset is being used. For example, for gaming purposes, the settings differ from those for playing Youtube videos. You can log in to the G Hub community and download the customized presets uploaded by the users.

We have addressed almost all the issues a user can encounter while using the G733 headset. Moreover, we hope our FAQs will have answered any questions you might have before buying the product. Write to us if you encounter any problems that we might not have covered.