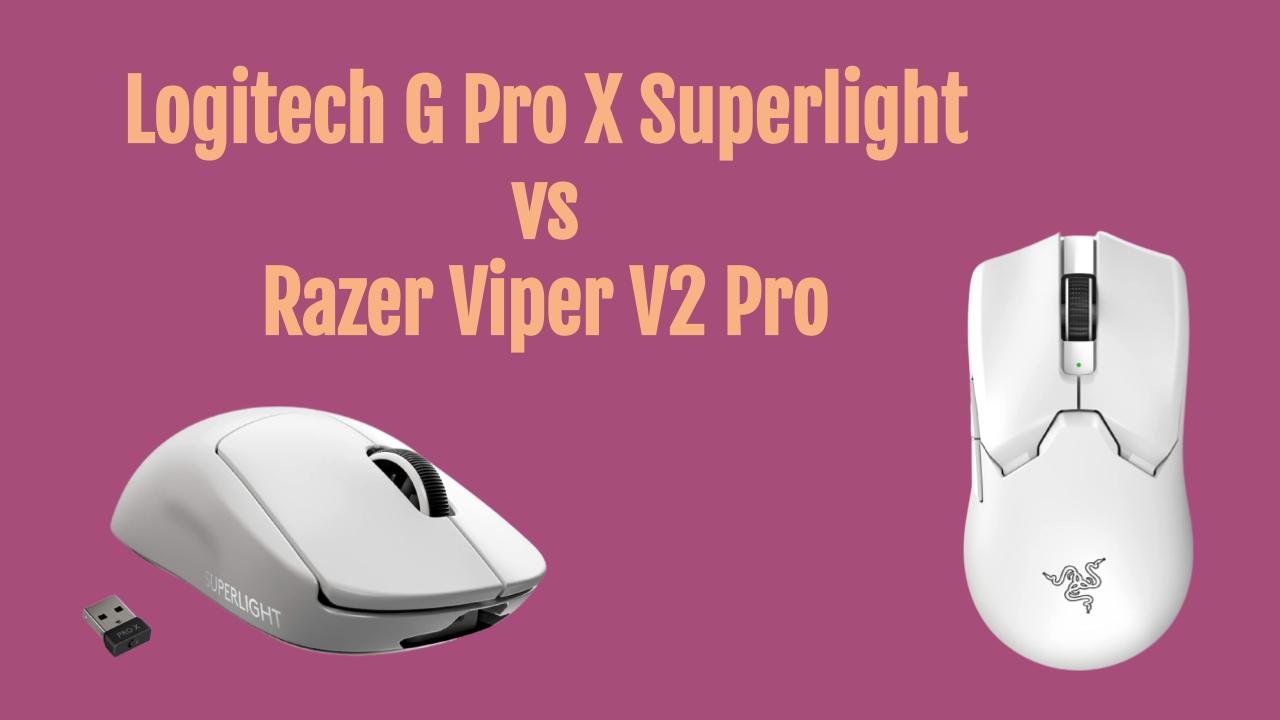 When it comes to gaming peripherals, few can match the refined and fine-tuned innovations that Logitech and Razer consistently bring to the table. Undoubtedly, they are giants in this segment and will not concede an inch to the other between them.

In March 2022, Logitech introduced its latest gaming mouse, the G Pro X Superlight and close on its heels, Razer not to be undone, unveiled its latest sophisticated version, the Viper V2 Pro in April 2022.

Both these mice have incorporated distinct innovations over their respective predecessors and making it a tough decision for the user to choose between.

We examined both to help you to make the right decision.

Before getting into the details, here is a quick snapshot of the differences between two products:

The G Pro X is equipped with its previous Logitech Hero 25k sensor that supports up to 25,600 DPI with 400 IPS that includes precision sensors to enhance its speed and accuracy during tournament play with high demanding games.

A critical enhancement comes with integrating the NVIDIA G-Sync display with the NVIDIA Reflex technology to maximize all latency related issues.

However, the G-HUB Software used can be improved to reduce external interference that cause double-clicking issues. Razer did exactly this with its Synapse app. But, all said and done, G-hub’s simplicity and user-friendliness makes navigation a breeze.

Although Logitech has incorporated all the latest technologies available, the Company has surprisingly opted for the Micro USB port. This is a reverse move to an older charging version.

With its marginal height advantage, it provides a solid claw-like grip within the palm. The pro-grade standards of quality and structure that Logitech is known for are all emphasized in the G Pro Superlight while maintaining an eco-friendly, zero-carbon emission goal.

There is a distinct reduction in weight by up to 25% over its predecessor without compromising on its performance.

The scrolling wheel is marginally tilted to the left, though very firm and secure and not affecting its performance.

The Viper V2 Pro comes with the latest cutting-edge technologies with a distinct view on enhancing e-sports, Razer has made the V2 Pro lighter than any other.

The next-generation switches add to its efficiency considerably.

By offering an extended battery life, the V2 beats its nearest rival in this department.As well, the addition of the Focus Pro 30k optical feature, the V2 brings a new dimension to gaming.

Razer has produced a truly high-performance mouse adding great value to its already legendary status in this domain.

Razers’s PC gaming Divison head, Chris Mitchell said they have considered the opinions of e-sports professionals and the mouse gaming community to fine-tune the V2 Pro, and have accordingly implemented minute changes like improving the sensor and even adding an extra mm to the side buttons for better functionality.

An auto-sync Synapse application offers a host of functions like adjusting the DPI settings [125, 500 and 1000] along with the preset ones and the polling rates and smart track calibrations and another key customization for users to set their own lift-off and landing settings.

The 30K optical sensor brings an accuracy of 99.8%. Additionally it is assisted by AI Smart Tracking Motion Sync which increases its responsiveness and the new Asymmetric automatic Cut-off function offers 26 different options.

The Gen 3 switches have eliminated the possibility of double-clicking, reducing the debounce delay. Importantly, they are good for 90 million clicks!

The PTFE feet need a special mention as they bring a phenomenal floating feel against the gliding one the others have.

The weight reduction has been made possible by reducing 2 buttons from its right-side panel, [which can be an issue for lefties], along with the magnetic charging port that was present in its predecessor by replacing it with a simpler but efficient Type – C charging port. Additionally, the side grips have been done away with without affecting the V2 Pro 2’s firm, grip and feel, but are offered separately in the box, with the relevant cut-outs to accommodate the buttons on the left, for users that may prefer it.

The design is classy and simplistic without any extra LED lights, instead, a small green dot light is provided just behind the scrolling wheel to indicate the DPI settings and the battery percentage and a printed logo just below it.

What do users think?

While most gamers had good things to say about each of them, here is what the truly discerning views are:

Most users were unanimous with the better grip that the GPX offered with its higher hump and rounded design,especially for those with slightly larger palms.

Also, many felt the clicking sound of the V2 Pro was more pronounced than the Logitech GPX, especially when clicking the right one.

The Micro USB charging dock of the GPX was unacceptable to most and some were unable to understand the logic behind incorporating a Micro-USB in today’s age and time.

There were a couple of users who felt that aiming precision was inaccurate in the V2 Pro and the main reason for this aberration was having to dig the mouse harder into the mouse pad. As well, the 15-degree tilt in the sensor could be adding to this error though not very significantly.

In all fairness, they are both very competent mice and leave very little to choose between them. The higher DPI settings [25.6K in the G Pro and the 30K in the Viper V2 Pro] matter little as about 10K would be sufficient to master the most high-end/fast-paced games presently. Each one of them has introduced their apps that have respective Pros and Cons and choosing the right one may depend on individual needs.

However, we observed a glaring issue with Logitech persisting with its Micro USB Charging port. Viper on the other hand has incorporated the Type-C charging port which is the order of the day.

Viper has kept an eye on future innovative games being produced and offers a little extra, and our opinion marginally tilts in favor of the Razer Viper V2 Pro.

Although both are extremely efficient in their own right, the truth is that high speed and precision matter little to users in this segment and they have had no significant impact. As a result both the Logitech G Pro X Superlight and Razer V2 Pro are equally suitable.