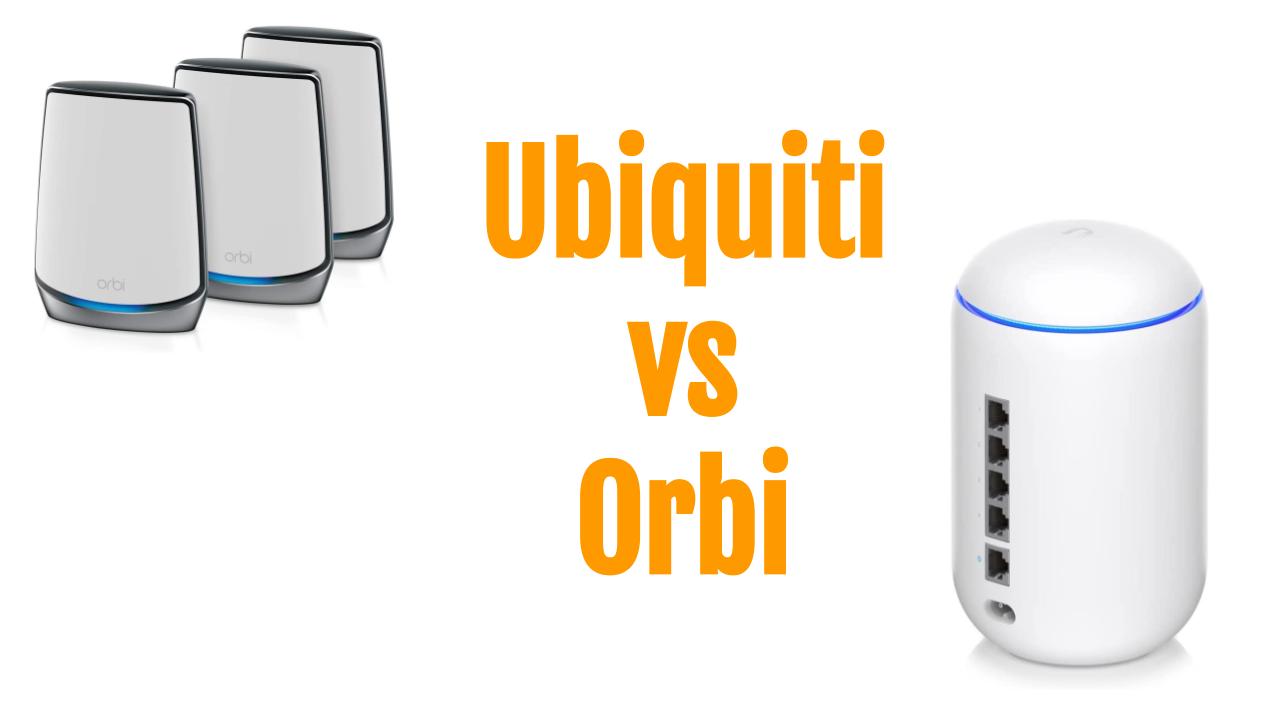 The Orbi WiFi 6 (RBK852) and the UniFi Dream Machine by Ubiquiti are some of the best routers on the market today due to their outstanding features. With either choice, you are all but guaranteed a super-fast WiFi connection and effectively extended coverage.

The Orbi WiFi 6 comes as a combination of one router and one satellite extender. In contrast, the UniFi Dream Machine comes as a stand-alone all-in-one device (router, controller, wireless access point, and switch).

Yet, you may question how the two measure up against each other in your bid to choose the best brand for your home or small business. Below, we will compare the two mesh-ready systems and help you decide which one offers you the most value for money.

Differences between the Orbi and UniFi

Which device is better – Unifi or Orbi?

Depending on the client and situation, the faster brand is the Orbi WiFI 6 RBK852 with its high single client speeds, as long as you have WiFi 6 devices. It will matter more in the future once more Wi-Fi 6 gadgets are added to households.

On that note, this does not mean that the UniFi Dream Machine is slow. Being relatively new tech, only devices that support WiFi 6 will grant you the benefits that the Orbi RBK852 offers. For most setups, the UDM will thus give you performances that are equivalent to or even better than those provided by the Orbi.

The UDM’s 4×4 WiFi 5 AP means outstanding speeds to singular devices, even though it won’t match the Orbi WiFI 6 RBK852 when WiFi 6 devices come into play. Remember that what matters most is the device features and software differences. For further context, few devices currently tap into the highest speeds of the Orbi WiFi 6 RBK852; the iPhone 11 Pro and upwards are examples of those that can.

The Orbi RBK852 does not give you as many sophisticated networking features as the UniFi Dream Machine. Depending on what you are looking for, it can be an advantage or a disadvantage.

By adding more satellites, which play the same role as the mesh nodes in a UniFi ecosystem, you can expand the range of the RBK852, as each extends your network to cover an additional 2500 sq. ft. The eventual setup is nothing like the UniFi ecosystem, even though it comes at a higher cost. You can add varying models of access points, switches, and routers with the latter while still keeping the expenditure down.

Good WiFi coverage considers access point choice, placement, and the RF environment, no matter what brand/device you have at hand. If your target is a small area, then the Orbi WiFi 6 Rbk852 and UniFi Dream Machine are both excellent choices that will serve you well.

Performance and range over multiple floors or large (extended) premises depend on how many access points are available. Thus, a singular access point will not cut it for larger areas, and you will need mesh APs or wired APs.

The Orbi WiFi 6 and UniFi mesh will both work well. Yet, you will get the best results (superiority and consistency) when you have numerous UniFi access points operating a wired backhaul. The Dream Machine edges the RBK852, which remains superior only if you want a high-performance mesh and can afford the cost.

What are the compatible modems for Orbi?

Some modems exist as stand-alone to support Orbi and will bridge the gap between your home network and the internet in general. In the form of cable modems, others combine the power of modems with home mesh-ready WiFi routers in one device.

Note that the Orbi is already a modem and router simultaneously, and you will need to turn off your modem’s WiFi since it connects directly to the cable wall outlet and replaces your modem.

Below is coverage of some of the best compatible cable modems from Orbi.

Just like its name suggests, this all-in-one cable modem from Netgear replaces your cable modem and router while also upgrading your Wi-Fi’s performance, de-cluttering, and saving you money at the same time.

It has a built-in DOCSIS 3.0 modem that has 32×8 Channel bonding. Otherwise known as Ethernet bonding, Channel bonding is where two adjacent channels are merged to increase the throughput from two or more wireless devices. In a 32×8 scenario, the already smooth connection is also 32 times faster with top-level speeds of up to 2.2 Gbps, buffer-free.

It also eliminates WiFi dead zones and maintains internet speed due to its tri-band tech, even if there is an increase in the number of connected devices. The four Ethernet ports also allow you to connect multiple devices without the inconvenience of having to get an Ethernet splitter.

The device uses 12V/3.5A to run, with the Orbi app giving the more expansive user control over all major ISPs, save for Verizon, AT&T, and Century Link, with which it is incompatible.

To top it all up, you can increase your internet coverage, increasing the covered surface area beyond 2000 sq. ft, by supplementing it with Orbi satellite extenders. Note that these are sold separately.

This Nighthawk takes things a notch higher by supporting internet and voice plans at up to 800 Mbps, working with any router you connect it to, to sustain all your wireless devices through four Ethernet ports.

You can use it with the Xfinity Voice service, alongside 1 or 2 telephone lines, to give you advanced call features such as three-way conferencing, call forwarding, and caller ID referencing.

It also has the 32×8 channel bonding based on OFDM 2×2 and DOCSIS 3.1, allowing it to reach higher speeds up to 32 times faster than your average router. As a bonus, the link aggregation also combines two separate 1G ports into a single 2G port that contributes to an increase in speed.

Should I switch from Orbi to UniFi?

The answer depends on your scenario, which may be unique to almost every other that users find themselves in. You may or may not need to switch to UniFi.

The first issue you should examine is whether your current Orbi setup meets your current needs or not and what you value most out of a mesh system and routers.

Do you value higher internet speeds or better security? Is it better coverage around your premises or more consistent performances? Do you wish to eliminate the common problems whenever iOS and Apple devices, in general, come into play?

One user’s answer will differ from yours, and their needs may not justify switching from Orbi to UniFi. The Netgear Orbi has its advantages, and crossing to UniFi will come with a tradeoff that could mean given limitations in another department.

It doesn’t mean switching to UniFi would be a bad idea, just that you would need to determine if it fits in well with your unique situation. A finite solution would be nearly impossible to offer, this being a generic situation.

The best way forward is to identify the fundamental problems you face and whether or not you need to ditch the Orbi for the UniFi. Once you know what you want to solve with the move, it’s easy to prioritize finding a solution within what other solutions Orbi has to offer, incorporating a few UniFi devices into your existing setup, or switching entirely.

Should I acquire the UniFi Dream Machine as the main router with RBR50 and RBS50 as Access Points (APs)?

The UniFi dream machine can work well as the primary router with the RBR50 and RBS50 as access points, as long as you counter any arising conflicts. The setup would result in two WiFi access points that would conflict by default, unless the WiFi channels are differing, with minimal neighbor traffic, at that.

The setup would just imply having two different WiFi networks that work seamlessly alongside each other, albeit independently. So long as the UniFi Dream Machine, your main router, operates through one WiFi channel and your RBS50 is on another channel, you should be fine.

Note that this is for both the 2.4 GHz and the 5 GHz channels. An alternative to this setup would be to simply disable your UniFi Dream Machine’s WiFi, leaving only the RBS50 as your access point.

Does Alexa work with Orbi and UniFi?

Yes, Alexa works well with the Netgear Orbi and Ubiquiti UniFi. For the Orbi, it is via the Netgear skill provision. You can leverage the Orbi app to help you with the remote management of the Orbi WiFi system.

As for UniFi, Alexa can be granted and denied control as you wish, at will, either manually or automatically. You can use the Creston remote control or the Creston Home app to gain total control of Alexa.

Do I need a mesh network, and what should I base on when choosing one?

You may or may not need a mesh network seeing as it does little to improve the quality of internet coverage from your ISP. All your mesh system does is enhance the consistency of your network’s performance within the confines of the speed your ISP provides.

If you have problematic zones and areas within your home where the network coverage is poor, then a mesh network is your answer. It will amplify and pass along your wireless signal so you can have the same powerful network connection all over your property.

This is unlike your typical router and network extender combination that will spread the reach of your network at the expense of sometimes up to a 50% loss in speed if you are connected to the extender.

The extender can work well if the WiFi dead zones do not exist in multiple parts of your property; should you need more than one extender, opt for a mesh network instead.

On that note, the most important factors to consider when choosing a WiFi mesh network are overall performance, range, and price. Your qualitative experience when using the system also matters a lot. It doesn’t serve you to have a mesh system that is impossible to install; however great it is.

Therefore, how easy the mesh network is to install and how its price fits within your budget also matter a lot.

If I switch to UniFi, would I have to replace everything?

The simple answer is no. It is possible to make a partial switch and retain many of the components of whatever brand you were initially using. Depending on your home or business needs, you can use a few AP’s from one brand, alongside switches and a controller from two other totally different brands.

UniFi Port PoE switches work efficiently and seamlessly integrate with other brands. For instance, it is not uncommon to see CISCO switches working with UniFi AP-PROs, alongside a Linux controller. In some other cases, Netgear routers work well with UniFi APs, as long as the SSID and password are different.

In conclusion, it’s best to do some background research and note the compatibility of given components from different brands. This way, the switch is seamless as you would have ironed out any would-be problematic areas beforehand.