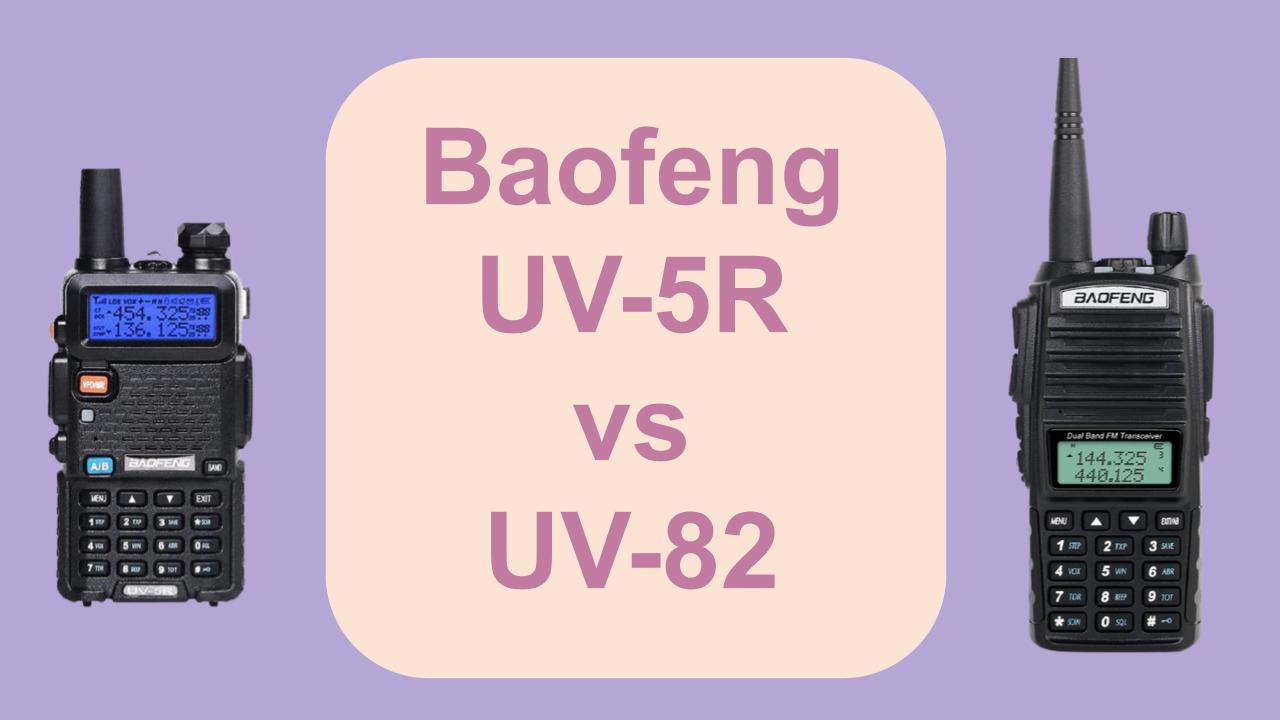 Both the Baofeng UV-5R and the UV-82 are economical and feature-rich dual-band radios. The package for both radios includes the walkie-talkie, a rechargeable battery, one antenna, a belt clip, a user’s manual and a desktop charger.

The table below compares the features of the Baofeng UV-5R and the UV-82 radios.

One of the outstanding features of the UV-82 is dual Push to Talk (PTT): this allows transmission on two different frequencies that can be selected by the PTT rocker switch. This means that instead of keeping two active ham radios in case you need to transmit on two separate frequencies, you can have one UV-82 and switch between frequencies when required. However, this is a personal preference issue, as some users will prefer to keep two separate radios. It is also true that some users simply prefer single PTT.

The UV-82 radio also has higher audio output compared to the UV-5R. The battery capacity of the UV-82 is also slightly higher than that of the UV-5R.

The buttons on the UV-82 keypad are slightly larger which makes their use easier. The number ‘0’ on the keypad of the UV-5R is not located in its usual position on similar keypads, and this can be annoying for some users.

The Baofeng UV-82 supports the Voice Operated Transmit (VOX) function for hands-free operation. The VOX level and delay are adjustable as required.

Table 2 compares the specifications of the radios used for the Baofeng UV-5R and the UV-82.

As you can see, the cited specifications for both radios are quite similar: the only major difference is that the UV-82 has a higher maximum transmit power which translates to a higher range for the radio.

Let’s take a look at variants for the Baofeng UV-5R and their main differentiators:

The Baofeng UV-82 by comparison has a smaller number of variants:

Let’s now take a look at some of the accessories available for the two radios.

Users report that field programming the UV-82 is not easy if one refers to the manual. They recommend referring to websites such as miklor.com for help with radio programming.

The Baofeng UV-5R received mostly favorable reviews as users felt that it offers the best value for money and is ideal for beginners. Users found it easy to use. Some advanced level users opined that the radio performance is not comparable to more expensive units, but that is understandable given the economical price of this radio.

Users also recommend replacing the stock antenna on both the UV-5R and the UV-82 with a Nagoya 701 or Nagoya 771 antenna. We’ve discussed a number of antenna options for Baofeng radios in this longer post here.

It should be noted that both these radios offer exceptional value for money: advanced users testify that these radios cost 10 times less than more expensive radios, and considering their low prices, can be considered as disposable radios which can be replaced easily i.e. with a minimal amount of capital expenditure. If a Baofeng falls out of your pocket while you are on a tower or driving through a forest, you certainly won’t get a heart attack. The same can’t be said if you drop a much more expensive Motorola unit!

Reasons to buy a UV-5R

Both the Baofeng UV-5R ham radio and the Baofeng UV-82 ham radio are feature rich amateur radios. Both radios can be programmed with CHIRP and a USB adapter. The dual PTT function on the UV-82 could be something that makes a user go for it instead of the UV-5R. Other than that, with near-identical prices and features, it would seem that the choice between the two would come down more to a matter of personal preferences than anything else.