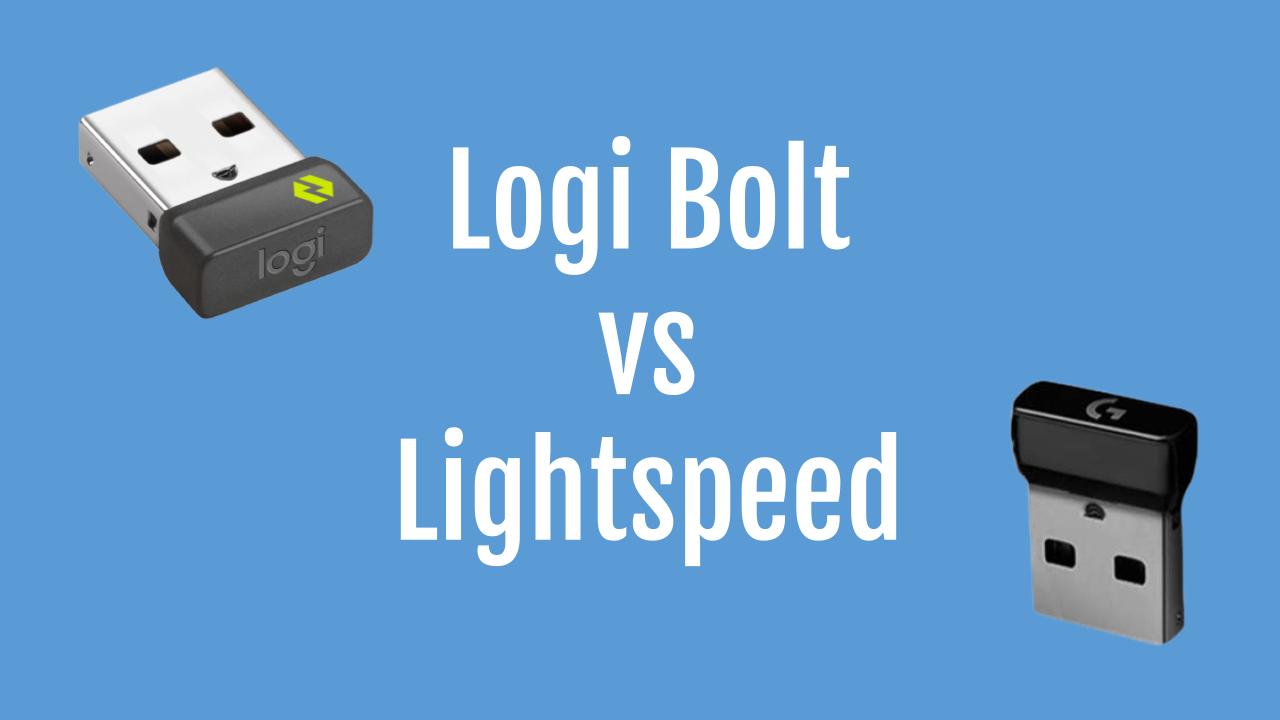 In this article, we introduce two Logitech receivers, the underlying technology and differences between the two product types. The post also includes the lists of compatible devices and their recommended applications.

An Introduction to Logitech Lightspeed Products

Logitech Lightspeed products like headsets, mice, and keyboards connect to a PC without any wire, cord or cable. Instead these products utilize a wireless nano receiver that has a USB adapter.

How does Logitech Lightspeed Work?

Users can connect the Logitech Lightspeed Wireless Nano receiver directly to the PC’s USB port or through a wireless extension adapter. One end of the adapter is micro USB and the other is USB.

The wireless extension adapter allows the placement of the wireless nano receiver closer to the peripheral such as a mouse. The image below shows how this is done.

With this recommended placement, these devices are able to operate with very low latency compared with other wireless receivers such as Unifying or any other proprietary system.

Lightspeed receivers are device-specific and can’t be shared. The peripherals’ model numbers are printed on their corresponding dongles too. That means the specific product connects only to its specified dongle. Although the new Logitech device pairing tool claims the receiver connects with any products from the same family, in actual fact, it doesn’t work for most devices.

Associated products from the Lightspeed family are marked as reliable gaming devices for players because of their high performance and low latency.

The Lightspeed receivers use a USB 2.0 protocol and offer a wireless range of 33 feet. For low latency however it is recommended to place the mouse very close to the nano receiver and also to place the receiver away from other wireless products operating at the same frequency. These devices include wireless access points and microwave ovens.

Gamers in CS: GO tournaments first used products like the G502 mouse because of their sensitivity, response rate, and accuracy in data-saturated environments. These devices have become an ultimate choice for gamers in high-end gaming, where milliseconds matter and accuracy can’t be compromised.

Moreover, gamers can add the power play pad to their collection. This power play base comes with a built-in receiver and allows wireless charging of the mouse. So users no longer need to charge their wireless mice. Just plug the power play mat in the PC with the help of a USB cable and let the mouse sit on it. The wireless mouse will keep on charging while the users can use it.

These devices can connect themselves to two gadgets i.e PC, Tablet, Laptop etc. simultaneously using the Lightspeed mode and Bluetooth connectivity. So the user doesn’t have to hop between the devices’ connections. Moreover, the connection has two modes, i.e., a high mode that gives a 1ms response rate for gaming and designing where higher accuracy and non-negligible accuracy is required and a low mode that drops the rate to 8ms for routine office work or internet surfing that doesn’t require much precision or fast reaction.

These products come with a container to place the USB receiver when not in use. So there are fewer or no chances of USB misplacement.

Which Devices are Compatible with Logitech Lightspeed?

The list of Lightspeed enabled mice, keyboards and headsets are as follows:

The Logitech Lightspeed receiver is replaceable.

Each device has its own dedicated receiver. So a dongle for one keyboard like the G915 for example cannot be used with a G613 keyboard.

Where to Find the Logitech Lightspeed Receiver If Lost

A recent comment from one of the Logitech representatives on a reddit post stated that the new pairing tool could make the Lightspeed receivers work for all associated products. But, in actual fact, it doesn’t work for most products.

Although the Logitech website offers spare parts for most Logitech devices, they don’t offer spare parts for this family of products. As a result if you lose the receiver, you have to buy a replacement receiver dongle on eBay.

Are Logitech Lightspeed Devices Better than The Wired Versions?

Wired devices, especially mice, limit movement due to their cords and are inefficient in terms of precision. On the other hand, many users avoid wireless devices because of their battery dying in the middle of a job and the slower reaction time for situations where non-negligible pixel precision is required.

Latency, speed, weight, and power issues must be overcome for wireless devices to become a choice. Logitech lightspeed devices are built carefully at each step to achieve these goals. These devices have a 1ms response rate even in noisy surroundings. The powerplay pad allows infinite mouse charging even when the user is working.

Users are satisfied with the lightspeed devices’ latency, range, and response rate. Some users were disappointed to discover that the receivers are dedicated to their respective devices only. While others said this feature makes it secure and faster as the receiver doesn’t have to figure out from which device the signal is coming.

An Introduction to Logi Bolt

Logi Bolt is Logitech’s newest wireless USB system for keyboards and mice. The receiver offers paired USB and direct connection via low-energy Bluetooth technology with an A-type USB port. The receiver has a green-colored logo on it for better recognition.

Users can connect up to six devices with a single Logi Bolt USB receiver. The receiver has a 10m wireless range in line of sight. This range may vary depending upon environmental conditions. Logitech promises reliable connection through logibolt even in congested wireless interference environments.

The Logi Bolt receiver is compatible with almost all operating systems for PCs and phones, including Windows, Mac OS, Linux, ChromeOS, Android, iOS, and iPadOS. These receivers are not compatible with other products. But they can work well with a PC even when other wireless devices are connected to it. In this post we have compared the Logitech Bolt technology versus the Unifying receiver tech.

The receiver comes with a pre-paired connection to its corresponding device. The user doesn’t need any help software to establish the connection. They can just plug the receiver in the PC and start using the associated peripherals. The receivers can also handle the pairing of additional Bolt devices by establishing a secure connection that requires an authentication process.

The user can connect five other Logi Bolt devices to the receiver along with the product it originally came with. It leaves the user free from the hassle of installing and removing the device’s dongles repeatedly.

Logi Bolt products work well in noisy environments because of the high RF link budget. In simple words, the receiver can calculate the signal losses due to noise, frequency interference, and congestion during transmission from the product. The receiver then boosts the signal as per the requirement to better communicate with the device connected with it.

The receiver is engineered with a secure connection-only mode. That means there is always an encrypted and secure connection between the devices, and non-Logibolt devices can’t connect with the devices. In this way, there are fewer chances of MouseJack hack, where the nearby hackers connect to the device receiver to get control of the PC.

To sum it up, Logi Bolt is a secure technology with features of reliability, connection strength, and compatibility with all OS.

What Are The Logi Bolt Compatible Devices

The logibolt receiver is not compatible with non-logibolt devices. The list of compatible devices is as under:

Logi Bolt receiver is replaceable, and the user can buy a separate receiver if the original one breaks or is lost. Replacement receivers are compatible with all Bolt products.

Users liked the fact that Bolt devices are comfortable to work on even in congested, noisy areas. According to a reviewer, the low-energy Bluetooth connectivity has made the devices secure to use. Users are happy with the receiver’s universal OS compatibility and the connectivity option for devices without USB ports like Phones and tablets. Although the non-compatibility with devices other than Logibolt bothers some users, they are happy that the replacement receivers are easily available in the market.

How are Logitech Lightspeed and Logi Bolt Receivers Different?

They are both wireless technologies designed to make the use of computer peripherals easy and comfortable. Both the technologies have some differences that are mentioned below:

Latency of a peripheral device like a mouse or keyboard is the lag experienced by a user. So the higher the latency the worse the performance. Typically in applications like gaming, latency matters. It matters a lot! Gamers don’t want slow response times. In enterprise use cases while lag can be frustrating, the response times don’t have to be as fast as in gaming applications.

So with that in mind let’s take a look at how the latency of Logi Bolt mouse compares with that of Lightspeed products.

Logi Bolt mouse has between 4 and 7 milliseconds of latency. Compare that with mouse devices from other companies that have anywhere from 57 to in excess of 80 millisecond latency. That means that Logi Bolt has up to 8 times lower latency than competing products.

Now let’s take a look at the latency of the Lightspeed products.

Lightspeed wireless mouse has under 1 millisecond of latency. That’s about 6 times faster than other company products that have in excess of 4 ms latency. This means that the Logitech Lightspeed products are highly responsive to user input. This makes it ideal for gaming applications.

We have given a detailed review of Logitech Lightspeed and Logi Bolt receivers. Their technology, compatible products, features, and user reviews were discussed. Important features were compared at the end to give you a quick overview of the differences.

We recommend Logitech Lightspeed products if you are a gamer at heart and want an uninterrupted wireless experience. Logi Bolt products should be your choice if you want a wireless experience with minimum interference and a high level of communications security.