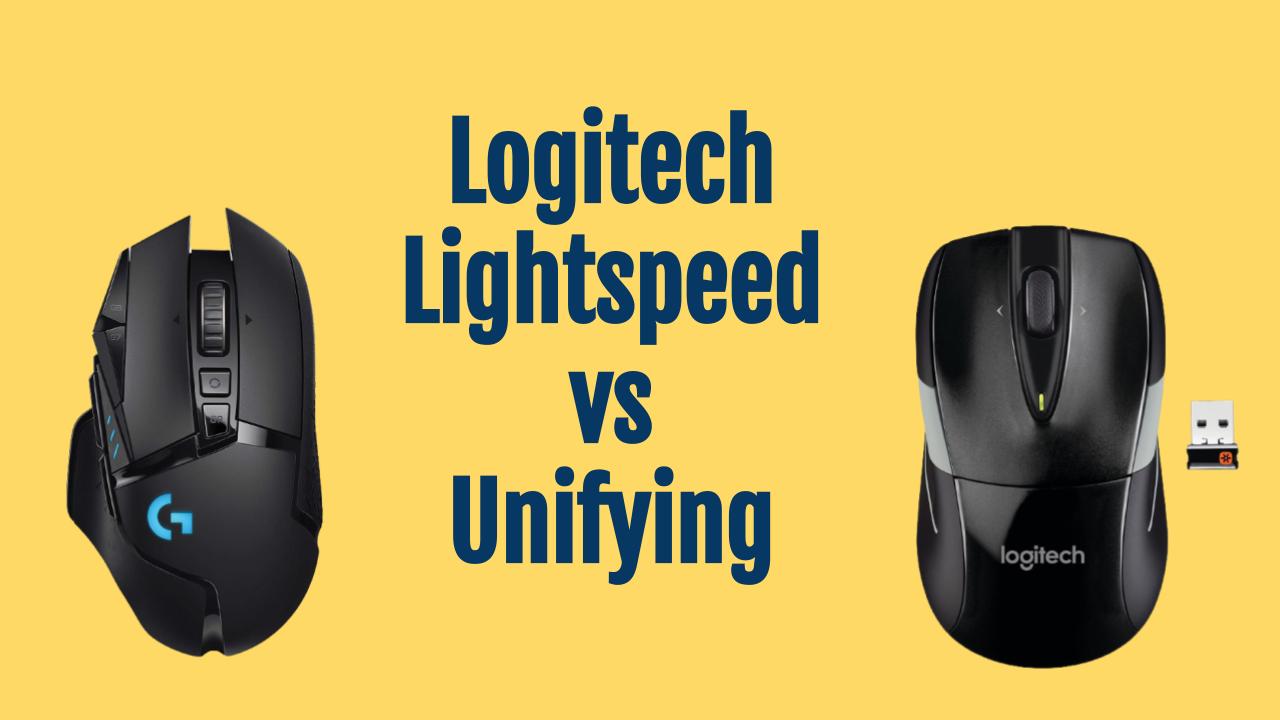 Logitech manufactures Lightspeed and Unifying USB peripherals – keyboards and mice – that connect with computers wirelessly. Each has unique features, applications and benefits that will be discussed in this article.

Logitech Unifying receiver products like the MK345 Keyboard and Mouse combination use advanced 2.4 GHz technology to connect the devices at up to 10 meters with minimum lag even in the noisiest environments. You can simultaneously connect six unifying devices to a single unifying receiver using its user-friendly utility software.

You can recognize the unifying receiver by an orange logo on the plastic side of receivers and devices.

The 128 bit AES encryption ensures a secure connection between the receiver and the connected keyboard. Although most unifying devices allow simultaneous connection to a single receiver, some newer devices have multiple profile connections. That means a single device can connect to multiple receivers at a time. With this, users can share a single peripheral with multiple PCs. Moreover, the receiver is small enough to safely leave it plugged into the PC.

Logitech Lightspeed devices use a unique, proprietary wireless technology operating at 2.4 GHz with a security protocol to ensure minimum interference. The receiver can switch communications to a silent band if it detects noise in the current frequency band.

These receivers allow one-to-one connection with their associated devices. That means they are neither unifying nor do they allow allow multiple profile connections.

Moreover, the Lightspeed devices only connect to their designated receivers. Lightspeed products are well recognized for the minimum latency and fastest response rates, making them the ultimate choice of gamers.

What is Latency and How Does it Differ for Both?

According to users, the unifying receiver is prone to interference more when connected to the USB 3.0 port. It causes either mouse, keyboard, or both to respond after some lag. Sometimes this lag is resolved after unplugging and re-plugging the device; other times, the problem may persist. The interference was also reported if some other device operates on RF nearby.

The interference problem causing latency in the Logitech unifying devices can be resolved by plugging the receiver in the USB 2.0 port instead of a USB 3.0 port. The other way to mitigate interference is to use a USB extension cable and get the receiver away from the interfering sources.

Please note that the interference is higher when the receiver is connected to the USB port at the back of a computer relative to connecting it to a front USB port. The amount of interference generated is also different for different motherboards.

No interference or lag was reported even in the noisiest environments, and gamers found the mice efficient enough to be used for winning their games. The lightspeed devices’ minimum latency and excellent response rate have made the wireless experience enjoyable for gamers.

Differences between Logitech Lightspeed and Unifying Keyboards and Mice

Both Logitech Lightspeed and Unifying keyboard and mice are available with their distinct features. Below we have discussed some of their differences. Let’s fist compare mouse products.

Next let’s take a look at the differences between Lightspeed and Unifying Keyboards.

If you lose a unifying USB receiver, you can easily purchase a replacement. Please note that the Logitech unifying devices can’t connect to a non-unifying receiver.

The Logitech Lightspeed peripherals don’t connect to receivers other than their designated ones. Fortunately if you lose the receiver you can replace it.

Can I connect Multiple Devices to Single Lightspeed Dongle?

No, Lightspeed dongles support a dedicated connection for the devices they come with. In other words, you cannot connect a Lightspeed G502 mouse and a G613 keyboard to a PC using just one dongle. The PC will need to have a separate dongle for each.

Can I connect one Lightspeed device (such as a keyboard) to two different PCs?

Yes with the push of a button you can easily and seamlessly connect to one of two PCs. One PC can use the Lightspeed dongle while the other PC will have to be Bluetooth-enabled with Windows 8 or later, macOS X 10.11 or later, Chrome OS™, or Android™ 4.3 or later, iOS 10 or later.