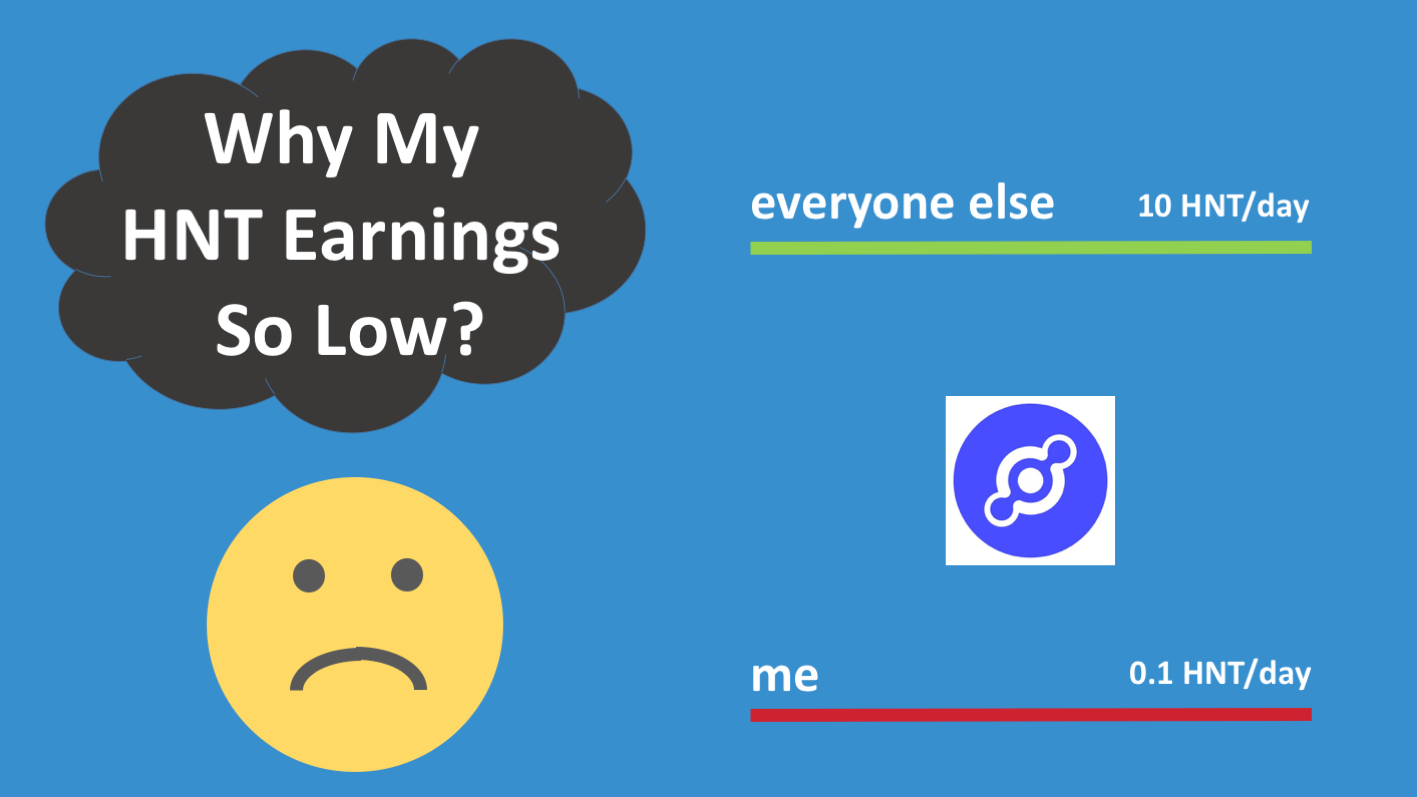 You discovered Helium, bought your miner and after weeks, possibly months of waiting, it’s finally been delivered to your doorstep. So you plug it in. After it’s all setup and good to go you realize your earnings are low – in fact they’re lower than you ever could have imagined!

So let’s take a look at the top reasons why your earnings are so low and what you can do about this.

The Network is Growing

A year later we are approaching 700,000. Back then I earned on average 10 HNT a day. Now I earn about 0.05 HNT per day with the same miner. With a fixed pool of HNT distributed to miners every month on average it is to be expected that a 20x increase in miners will reduce the HNT by a factor of 20. However there are also 5 more miners in my Hex to reduce my transmit scale. So the earnings might make sense. Unfortunately there really isn’t a lot that can be done about this one. Now if only I had a time machine…

Your Hotspot is not performing as well as it could

Here is a step-by-step guide on what you can do to optimize the performance of your Helium Hotspot.

First go to Helium explorer and check the activity of nearby hotspots. Are their rewards consistent with yours? There might be outliers where a hotspot is at the very top of a skyscraper next to you and that might explain a significant discrepancy. But for the most part if the hotspots near to you are earning as much as you, then it’s the network. And once again there’s not a lot you can do about this one.

If your hotspot is not performing as well as your neighbors, it’s good news! You can work on improving your earnings. So let’s get to work on this.

If your hotspot is in your basement right by your wireless router, there’s not a lot of witnessing going on. Why is that? Because it’s unlikely that other hotspots can see your beacons or that you can see other hotspots’ beacons. And witnessing is key to earning HNT.

Move the hotspot out of your basement and to the top floor of your house. Ideally your hotspot is on the roof of your house. But for a majority of people this is not possible. So get to the highest point possible.

Even in the densest hex in Toronto a miner is able to earn a reasonable amount of HNT by placing their antenna 105 meters above the ground.

Provide a reliable network connection for your Helium hotspot

An unreliable network connection will result in spotty connectivity for your helium hotspot. This in turn will result in lower earnings. A wired network is the way to go if you can.

Obviously a Wi-Fi network is the more convenient one. However, if you’re going to mount your hotspot externally on a rooftop far away from your access point, then a wired network may make more sense.

Finally, always check your network performance for both speed and latency. In one situation, I used a Powerline Networking Adapter thinking that it would be close in performance to wired network speeds. However I was mistaken. Something was limiting bandwidth to a small fraction of what I expected it to be. It was possibly interference on the power line.

Here’s where it gets interesting. Many people think that RF is black magic and that’s a justified impression. It’s not and you can learn about RF through books and kits. But the seeming unpredictability of how radio waves behave, and the fact that you can’t see them, gives RF that magical aura. The Helium network is an opportunity to both experiment with and understand RF. So let’s get to it.

A first step toward doing this is to upgrade from the stock antenna. The antenna that ships with your miner is a relatively low gain (2 dBi) antenna. This antenna trades off distance for a near omni-directional pattern. You can get either of the following antennas.

Ideally you should test with different types of antennas. The Helium network is growing rapidly and every day spent with a sub-optimal setup is lost opportunity to earn HNT.

Remove all Sources of RF Interference

There are many products that utilize the same frequencies (915 MHz and 869 MHz) that Helium Hotspots communicate on. Cordless phones and smart meters are a couple of examples but there are many other devices. It’s important to keep these away from your hotspot as they can interfere with reception. And when you have interference, it results in fewer witnesses and consequently lower HNT earnings.

If you are deploying your Helium miner on the roof of your apartment building and there are large antennas nearby it’s likely that LTE signals will interfere with your miner’s operation and you will need an RF filter.

Take care of your hotspot

This is an important but overlooked aspect of Helium. Here are a few basic things you can do to ensure that your hotspot doesn’t beak down and remains in tip top working condition.

If you are mounting your hardware outdoors or on your roof, that adds an additional layer of complexity to the setup. You’re better off buying an outdoor hotspot. However if you did not do that then remember to enclose the hotspot in an IP66 or IP67 enclosure.

Power down the Hotspot every time you change your antenna. If your RF terminal is un-terminated or open, any high power beacon transmissions can reflect back into the radio and damage it.

Place your helium hotspot close to the antenna. Placing it further away means you have a longer cable length and this adds to the attenuation that a signal experiences as it is received and reduces receiver sensitivity. Once again this will result in fewer witnesses and lower earnings.

In this post we have covered the different reasons why your hotspot earnings could be low and what you can do about that. The benefit of the Helium (aside from making money) is that there’s a lot to learn about RF and networks as you continue to optimize your hotspots for maximum HNT.

Upgrade your Helium rig with a higher gain antenna